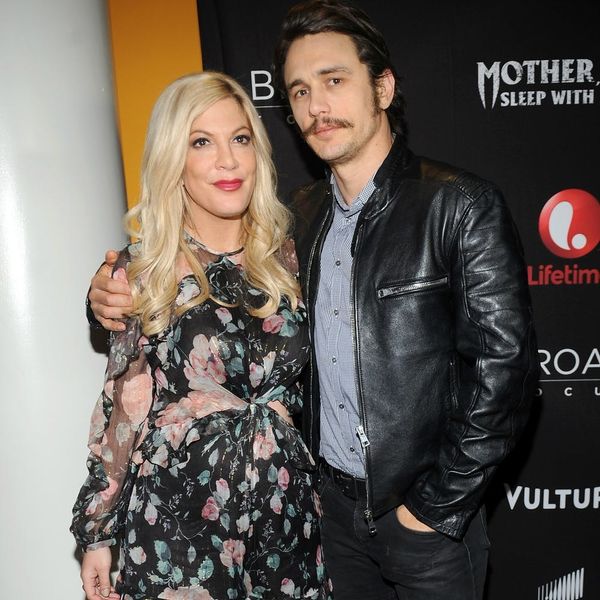 Stop what you’re doing and turn on Lifetime — James Franco has remade the mother (pun intended) of all classic Lifetime flicks, and it’s re-airing at midnight/11c.

The movie is (kinda’ sorta’) based on the 1996 cult hit Mother, May I Sleep With Danger? and stars newly tatted Tori Spelling as the object of an obsessive lover’s wrath, with James taking on the project at the network’s request for the film’s 20th anniversary. “I think the gimmick or interest in me doing it is that you wouldn’t think I’d do a Lifetime thing,” he said during a panel discussion.

And yet, here it is! In Franco’s somewhat warped version of the tale (some are hailing it the Citizen Kane of lesbian vampire movies), Tori is still present (though in a brand new role), as is Ivan Sergei (her crazed BF), but that’s about where the similarities end. Now, it’s her own daughter she must protect from danger, only this time, danger doesn’t lurk in the form of an abusive boyfriend — it lives in a vampire, because James Franco. The other big twist here? Tori’s daughter is a lesbian, and her girlfriend is also a vampire, albeit a good one.

The new #MotherMayISleepWithDanger premieres tomorrow on @lifetimetv! And 2day on my blog I'm sharing 10 things you might not know about the remake... And I promise, no spoilers! Go 2 ToriSpelling.com & read them now xoxo T #MMISWD

While some people are NOT feeling the remake (because we’d rather watch domestic abuse than two women kissing?), others are taking to Twitter to say they found it “bloody hilarious.”

Still others echoed the sentiments of E!, who thought it simply had too much going on, and that the characters should have been either lesbians or vampires, but not both: too multi-dimensional for one film?

Bottom line? This is one call you’ll have to make for yourself. Oh, and don’t worry if you can’t get to your TV — the movie will be also be replaying tomorrow night at 7pm/6c (see the channel’s full schedule here).

In the meantime, sink your teeth (pun intended) into the trailer below:

What are your thoughts on James’s campy remake? Shoot us a Tweet over @BritandCo!

Nicole Briese
Nicole is the weekend editor for Brit + Co who loves bringing you all the latest buzz. When she's not busy typing away into the wee hours, you can usually find her canoodling with her fur babies, rooting around in a bookstore, or rocking out at a concert of some sort (Guns N' Roses forever!). Check out all her latest musings and past work at nicolebjean.com.
90s
Pop Culture
90s Nostalgia