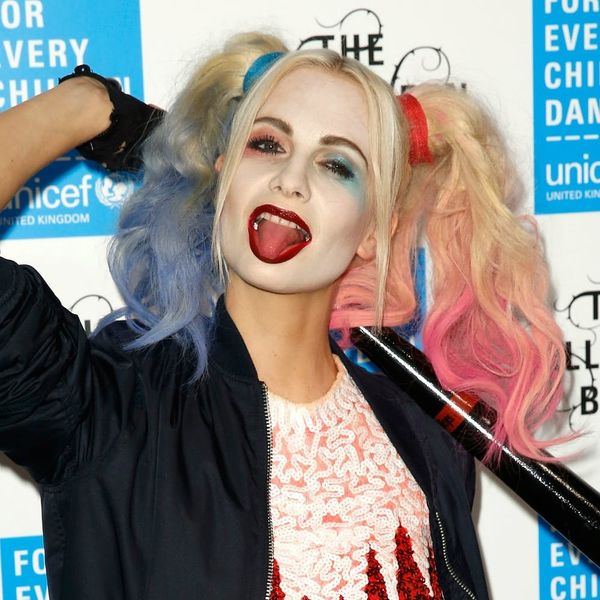 Halloween weekend is upon us (do you have your costume yet?), and though we’ve already gotten glimpses at some of our favorite stars in their 2016 getups (we’re loving LC’s DIY circus performer costume and Mariah Carey’s devilish brood), we’ve got a few more days to wait before we see what the rest of the celebs will be rocking this year. In the meantime, we’re taking a look back at last year’s best, counting down from good to great. Take a peek at which celebs had the best costumes of 2015!

14. Nina Dobrev: Nina Dobrev did such a good job taking on the Spice Girls of our youth that we nearly couldn’t pick her out from the lineup! (Hint: She’s “Posh.”) Kudos for not only coming up with a badass costume, but also for getting the whole group on board.

13. Nicole Richie: We love the androgynous take Nicole put on the Nightmare Before Christmas character, singlehandedly proving that girls can be anything they want to be ― even on Halloween.

12. Nicole “Snooki” LaValle: Nicole got the whole fam in the Halloween spirit with these super cute Star Wars getups. (Photo via Jamie McCarthy/Getty)

10. Aubrey O’Day: We’ve gotta’ say — we were pretty impressed with Aubrey O’Day’s creativity last year, particularly with regard to her surroundings. On hand for Maxim’s official Halloween party, where most female attendees were in some sort of generic skimpy fur, Aubrey stood out from the crowd in her intricate Cruella costume. (Photo via Michael Tullberg/Getty)

9. Dasha Polanco: Dasha was ‘90s perfection as everybody’s favorite lady of the night with a heart of gold, portraying Vivian Ward to an absolute tee. (Photo via Nicholas Hunt/Getty)

8. Mark Ballas and BC Jean: Also channeling the ‘90s were Dancing With the Stars star Mark Ballas and girlfriend BC Jean, who transformed themselves into ‘90s power couple Kurt Cobain and Courtney Love. So punk rock. (Photo via Michael Tullberg/Getty)

7. Jessica Alba: We love, love, LOVE Jessica Alba’s picture-perfect (or, in this case, Instagram-perfect) homage to one of our favorite movies of all time, Romy & Michele’s High School Reunion ― we only wish we could have seen how her moves stacked up (please say they held hands and twirled to Cyndi Lauper’s “Time After Time”).

6. Poppy Delevingne: Cara’s big sis gets major props for being an entire YEAR ahead of the trend, with Harley Quinn being this year’s #1 Googled costume, outranking even Star Wars characters. (Photos via Tristan Fewings/Getty)

5. Nick Jonas: How adorable does the baby Jonas look as the Hamburgler? (Photo via Todd Williamson/Getty)

4. Ashanti: Ashanti is pretty much the cutest Smurfette ever, getting extra points for effort for painting her skin, well, blue. Girl COMMITTED. (Photo via Mike Coppola/Getty)

3. Emily Ratajowski: Ashanti wasn’t the only one getting her skin paint on! Emily’s Marge Simpson is, quite frankly, brilliant: Not only is it totally unexpected, it’s spot-on. Yellow skin? Check. Red pearl necklace? Check. Impossibly erect bright blue hair? Check. We may never know how she pulled this off, but our hats off to Emily. (Photo via Mike Coppola/Getty)

2. Gigi Hadid: Julianne Hough may have been the Grease Live! cast pick, but based on this photo, we can’t help but wonder if it shouldn’t have been Gigi: From the hair to the makeup to the clothes, Gigi NAILED Sandy’s bad girl look. (Photo via Mike Coppola/Getty)

1. Chrissy Teigen: Coming in at number one is none other than Chrissy Teigen, who went TOTALLY outside the box (at least as far as Hollywood’s sexy starlet costumes are concerned), dressing up as cooking peer Guy Fieri. And not only that, she took on the look with such commitment that she could’ve doubled as his twin. This, Chrissy, is exactly why we love you. (Photo via @misskatiemesa)

Which star do you think deserved the #1 slot? Share with us @BritandCo.

Nicole Briese
Nicole is the weekend editor for Brit + Co who loves bringing you all the latest buzz. When she's not busy typing away into the wee hours, you can usually find her canoodling with her fur babies, rooting around in a bookstore, or rocking out at a concert of some sort (Guns N' Roses forever!). Check out all her latest musings and past work at nicolebjean.com.
Halloween
Halloween Costumes
Halloween Halloween Costumes
More From Halloween Costumes