The Most Shocking Snubs from the 2018 Emmy Nominations 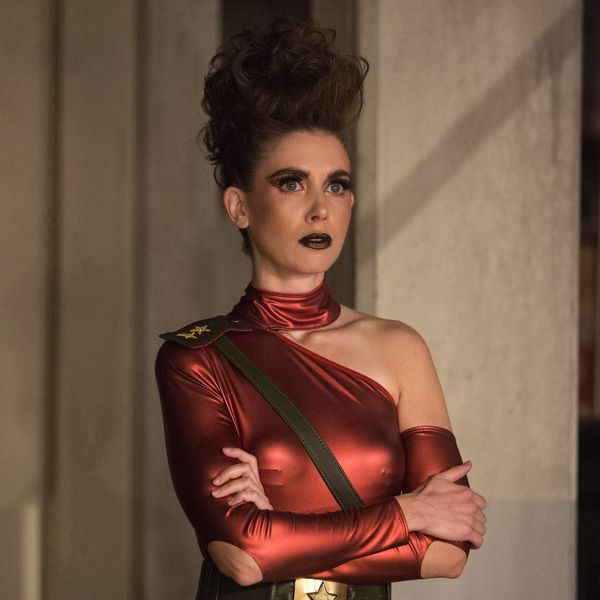 We were happy to see recognition for so many of our favorite stars and shows on the list of 2018 Emmy nominations, but we couldn't help noticing a few pretty glaring omissions. We know, we know — there's only so much space in each category. Still, we wish the Academy of Television Arts & Sciences had shown a little love to these worthy performers and series. Click through to check out some of the most surprising snubs. (Photos via Beth Dubber/Netflix + ABC/Ron Tom + Ron Batzdorff/NBC/NBCU Photo Bank via Getty Images + ABC/Bob D'Amico)
Mandy Moore, This Is Us: Milo Ventimiglia and Sterling K. Brown nabbed Emmy nominations for their costarring roles as Jack and Randall, respectively, but Moore, who plays Pearson family matriarch Rebecca, was left off the list of dramatic leading ladies. (Photo via Ron Batzdorff/NBC/NBCU Photo Bank via Getty Images)
Chrissy Metz, This Is Us: Metz earned a 2017 Emmy nomination for playing Kate on the NBC drama, but like her on-screen mom, Mandy Moore, she was robbed of a 2018 nod in the drama categories. (Photo via Ron Batzdorff/NBC/NBCU Photo Bank via Getty Images)
Kristen Bell, The Good Place: Ted Danson was (deservedly) nominated for his performance as Michael on The Good Place, but the Academy failed to recognize leading lady Kristen Bell, as well as the show itself. (Photo via Colleen Hayes/NBC/NBCU Photo Bank via Getty Images)
D'Arcy Carden, The Good Place: Kristen Bell wasn't the only actress from The Good Place that we were hoping to see on the list of nominations. Carden is both a fan-favorite and a scene-stealer as Janet, but this just wasn't her year. Let's hope the Academy recognizes her talent at future Emmys. (Photo via Justin Lubin/NBC/NBCU Photo Bank via Getty Images)
Winona Ryder, Stranger Things: Ryder (who plays Joyce Byers) consistently delivers some of the most emotional — and badass — performances on Netflix's Stranger Things, but for the second year in a row, she was robbed of an Emmy nomination. Her costars Millie Bobbie Brown and David Harbour, however, both have a chance to take home an award this year. (Photo via Jackson Lee Davis/Netflix)
Alison Brie, GLOW: Brie's Ruth Wilder (AKA "Zoya the Destroya") is a star in the ring on Netflix's GLOW, but the actress herself wasn't singled out as a 2018 nominee. The show earned a nod in the Comedy Series category, though, so fingers crossed that we'll still see her walk the red carpet — maybe with costar Betty Gilpin, who turned up in the Supporting Actress race. (Photo via Beth Dubber/Netflix)
Ellie Kemper, Unbreakable Kimmy Schmidt: Kemper's quirky performance as Kimmy Schmidt has earned her two previous Emmy nominations, in 2016 and 2017. But she was shut out of this year's Lead Actress in a Comedy Series category — which is an admittedly tough race. Like Alison Brie, though, Kemper will be able to root for her show for best comedy. (Photo via Eric Liebowitz/Netflix)
The Good Doctor: ABC's freshman drama was one of the most successful new shows of the fall 2017 TV season, and many expected nominations for both the series itself and star Freddie Highmore. Alas, it was shut out completely. Something tells us that won't stop people from watching, though. (Photo via ABC/Bob D'Amico)
Mindhunter: Netflix's creepy drama, which follows two FBI agents in the 1970s as they interview serial killers in an effort to understand the psychology of the crimes, earned plenty of fans but only one nomination — for guest star Cameron Britton. The rest of the cast (including stars Jonathan Groff, Holt McCallany, and Anna Torv) and the series itself were otherwise shut out. (Photo via Patrick Harbron/Netflix)
Modern Family: This is the first year since 2010 that the ABC comedy hasn't been included in the Outstanding Comedy Series category. It's also the first year since 2010 that none of the cast has been nominated. The only nomination it did get was for sound mixing. (Photo via ABC/Bob D’Amico)
Will & Grace: Not only was the show itself passed over for Outstanding Comedy Series this year, but Megan Mullally, who plays Karen Walker, was the only member of the main cast to earn a nomination. Debra Messing, Eric McCormack, and Sean Hayes were all snubbed. Given that the show earned a whopping 83 noms during its original run, though, we have high hopes for the future. (Photo via Chris Haston/NBC/NBCU Photo Bank)
Desiree O
Desirée O is a ‘Professional Bohemian’ who loves anything and everything related to the arts, entertainment, and pop culture. She ADORES being a ‘Newsy’ for Brit + Co, covering all of the latest tidbits of awesomeness that you want to read about. When she’s not writing, she’s either making messy art, going on long adventurous walks with her camera, or poking around over at bohemianizm (http://www.bohemianizm.com/). You can find out about Desirée O and her work at http://DesireeO.com/ or follow her on Twitter @DesireeO.
Awards Shows
TV
Awards Shows Emmys Fall TV TV