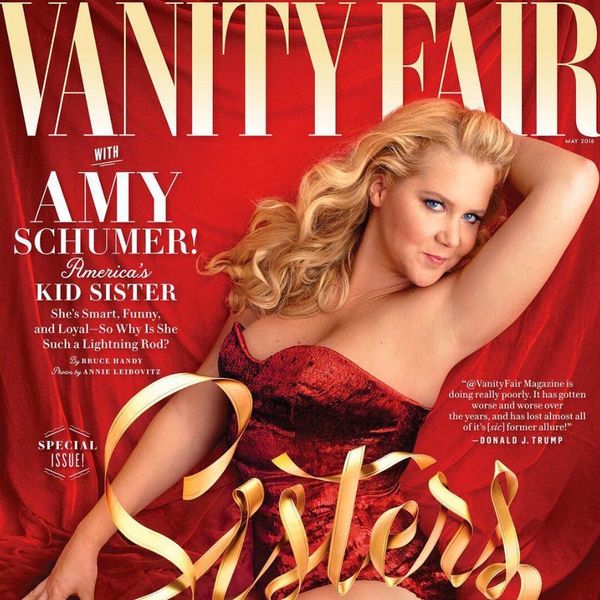 2016 is proving to be a pretty epic year for Amy Schumer. She’s back to working on a new season of her hit show, she’s “in love” with her boyfriend Ben Hanisch and, oh yeah, she just graced the cover of one of the most iconic magazines of all time. Earlier today, Vanity Fair revealed that Amy Schumer is the focus of the magazine’s May issue. In addition to a stunning spread shot by Annie Leibovitz, the publication’s senior articles editor Bruce Handy really gets into to with her in an interview about her recent accomplishments, women’s role in Hollywood and the dark side of fame. On a slightly lighter note, they also chatted about friendships (old and new), and during that convo, Amy mentioned an instance which — in our books — definitely solidifies her as the ideal friend to call after a break-up.

When Amy lets Bruce into her NYC apartment, he says she apologizes for the messiness, explaining that a friend crashed on her couch the previous night after a fight with a boyfriend. She tells Bruce, “We got into a meatball sub and some scotch last night. Like, I’m not going to let her get drunk alone.” Bruce mentions that, that is pretty much exactly the thing that you’d hope Amy would say and do for a friend, and TBH, he’s totally right. We always kind of envisioned Amy as that girl would could help cheer you up even on your darkest days, and it’s refreshing to see that she actually IS that person.

Bruce also mentions that there’s not a half-eaten box of Oreos on the coffee table like you might expect, but if we know anything about breakups and Oreos, it’s that the box probably was there but is now empty and hiding in the recycling bin.

What was your favorite part of this new Amy Schumer interview? Share with us on Twitter @britandco.