I Took an Anti-Gravity Yoga Class + It Was Exhilarating 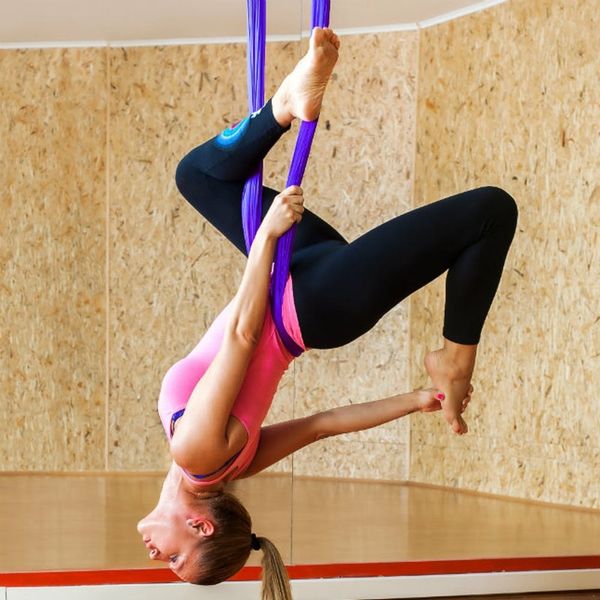 As an Aries, I’m pretty textbook. I’m independent, spontaneous, optimistic and impatient. I’ll start a business with confidence, chop off my hair on the fly and follow my heart across the country, sure, but that’s not to say I’m totally fearless. I may daydream about being Kate Bosworth in Blue Crush, but you won’t find me on a surfboard (sharks!), and don’t even talk to me about bungee jumping or skydiving. You get the idea. So when a friend suggested we try anti-gravity yoga, or aerial yoga, my first instinct was “Let’s do it!,” followed immediately by total terror. But since it’s a new year and I desperately want to be a part of Taylor Swift’s #girlsquad, I agreed to a session of this silks-yoga-acrobatic-hybrid fitness class at my local Richmond studio, Fighting Gravity Fitness.

Christopher Harrison, a New York-based gymnastics specialist and Broadway dancer, founded AntiGravity Fitness in 1991 as a way for retired professional acrobats, dancers and gymnasts to continue their practice out of the (literal) spotlight. He soon realized the mental and physical benefits he and his friends gained from the exercise could be harnessed by everyone, former pro-acrobat or not. He spent eight years developing safe, effective techniques and tools to prepare aerial yoga for the public. Now, there are classes all over the globe — even kids can do it! Which makes my hesitancy over anti-gravity yoga feel even more ridiculous.

Because you’re hovering above the ground in silks and using only body resistance to keep yourself in each yoga position, you’re able to stretch, strengthen and soothe your joints and muscles without straining them. Plus, hanging upside down and swinging releases happy hormones that put you in a super good mood. Harrison and the AntiGravity gurus claim the practice can even make you taller. That’s great news for me, since I clock it at just under 5’2″ and slouch like a sullen teen.

There were only four of us in the class and only one person had been before, so I was surrounded by newbies like me. Phew! Way less opportunity for embarrassment. Our instructor Jodi was confident, tiny, toned and upbeat, with a halo of blonde spirals framing her freckled face. So far, so good.

Jodi explained that we’d start every pose by getting inside the silk hammock the same way. You shake it out, stand in front of it with your back to it, put your fingers in (thumbs out) a little more than hip distance apart and scrunch the silks into your fists three times. Then you bend one knee and hop right into that hammock. Easy! I already feel like a circus performer (yass).

From there, Jodi guided us through a series of stretches, poses and positions that varied in difficulty. The modified sun salutations kept your feet on the floor, which I was thankful for, and the swing from the hammock made the transition through the positions feel particularly seamless and easy. There were a few stretches that required different parts of your body on the floor and inside the hammock at the same time. I found the hammock really did help me keep my balance, stretch further and rest my joints, which would have been impossible during a traditional mat session.

At one point, we just sat in the hammocks and swung in them like we were on a playground swing set. Another exercise simply called for us to back up with our chests on the silks as far as possible and just let go, gliding through the air like a flying squirrel or something. That was fun and made us all giggle, which Jodi assured us was the point.

Of course, these gentle positions were sprinkled between death-defying positions that had us doing backflips out of the silks and landing on our feet or dangling upside-down with only the silks around our waists and legs in the hammock, our heads inches from the floor.

Vampire pose had us doing a backflip to end upside down, with our arms and legs stretched behind us. Inverted star made us look like upside-down starfish floating in space. It was a tough pose, and when Jodi kept instructing us to “Just let go and relax,” I did the opposite of letting go and relaxing, which is hanging on for dear life and stressing.

Even though some of the harder poses definitely did NOT help me get my zen on, Jodi did an excellent job of coming around to assist each of us individually and giving us the courage we needed to do the flips and headstands that actually seemed impossible before we did them. Those poses that challenged our trust in ourselves and the silks were cool once they were over but definitely scary while they were happening.

Obviously, this wasn’t my usual yogic nirvana, all blissed out and serene. I felt exhilarated, strong and damn proud of myself for doing a handful of backflips and headstands — all before 10:30am. The adrenaline from aerial yoga was awesome, but I wasn’t able to get out of my head and stop worrying about hurting myself. So I have a hard time thinking of this as a yoga class, even though you’re doing yoga poses. If you’re into active group fitness classes and want to switch up your spin class routine or power yoga, I’d give this a go. But if you’re looking to slow your mind and de-stress, I’d say stick to the mat.

Would you try anti-gravity yoga? Tweet us @BritandCo and let us know your thoughts!