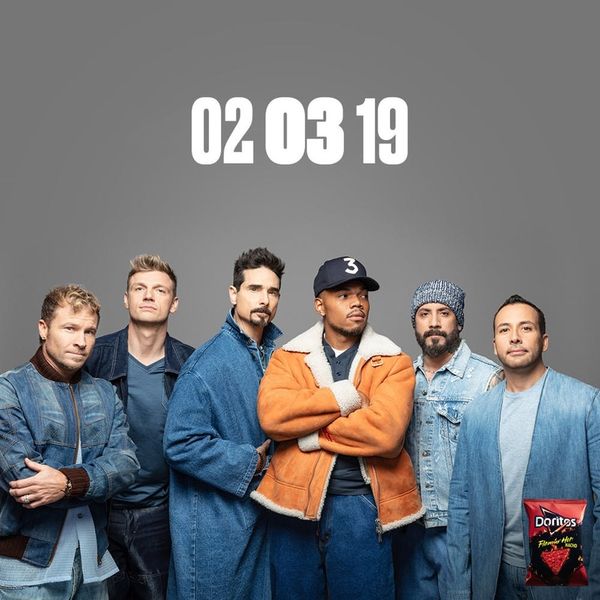 Backstreet’s back, baby. Well, really, they never left. For the past 25 years, the Backstreet Boys have proved themselves to be one of the hardest-working groups in the business. And while they certainly experienced a transitional period, it feels like they’re gracefully approaching their second stride. Over the past week, the band released their 10th album, DNA, and received their first Grammy nomination in 17 years. They’ll also be making a brief appearance during one of the biggest television events of the year: Sunday’s Super Bowl.

The Backstreet Boys have teamed up with Doritos and Chance the Rapper for a new ad that serves up both a heavy dose of nostalgia and a sampling of what could be a legitimately great music collaboration. We caught up with Backstreet Boys singer Howie Dorough to chat about what fans can expect from their upcoming tour, the unexpected Grammy nomination, and what it was like to work with Chance.

Brit + Co: Tell us a little bit about what fans can expect to see on Sunday!

Howie Dorough: When we got the offer a little over a month ago from Doritos, I remember seeing the treatment and being like, “This is ingenious.” We loved the idea of paying tribute to the video of us with the airplane and the oversized white outfits. We’ve embraced the nostalgia of who we’ve been accepted as. We’re able to be lighthearted about ourselves. To put out a commercial for the Super Bowl, I mean, that’s like the best of the best. Any artist would love to be in this spot. If you’re in the Super Bowl, you’re it!

B+C: What was it like working with Chance the Rapper?

HD: A true pleasure! We’re all fans of him. He’s a little younger than us, that’s for sure! But when we got to the set, he was a standup gentleman. Very humble. We both had a real admiration for each other’s work, and it was cool to see. He even told us, “Dude, I still remember when you guys came out with the Burger King action figures. I went out of my way to try to collect those things.” We were like, “That’s cool, man!” He was maybe like 12 years old or so [at the time]. It’s an honor to collaborate together, and hopefully, the door has been opened now for more stuff in the future.

B+C: Can you share any details about what fans can expect from your upcoming DNA tour?

HD: We are putting all the final touches on all the production right now. We’ve made the final choices on the set design for the stage. We’ve got an unbelievable show with all our greatest hits throughout the years. We want to take our fans through time and down memory lane, but we also want to sprinkle in some of the new stuff off our brand-new album that just came out this week. We’re just finishing up our Vegas residency, but this is going to be a totally different show and I think the fans are going to really love it. We start off in May in Europe and we’re back in the states in mid-July.

B+C: There’s been a lot of buzz about the Grammy nomination for your new single Don’t Go Breaking My Heart. How does it feel to be nominated for the first time since 2002?

HD: It feels amazing just to be in the mix again. We’ve been together a little over 25 years and we’ve been going nonstop. After the height of our music in 2001, after the Black and Blue album, I think a lot of people thought we disbanded just because we weren’t all over the radio. Kevin [Richardson] had taken a break, but the four of us kept on going. We carried the torch. Now to have this second coming, and to have our first single [off the new album] nominated for a Grammy, from our peers, that’s amazing. Not only do we try to make music first for ourselves and our fans, but to have the industry respect and honor it, man, we feel like winners already.