This Is Not Your Grandma’s Baked Alaska 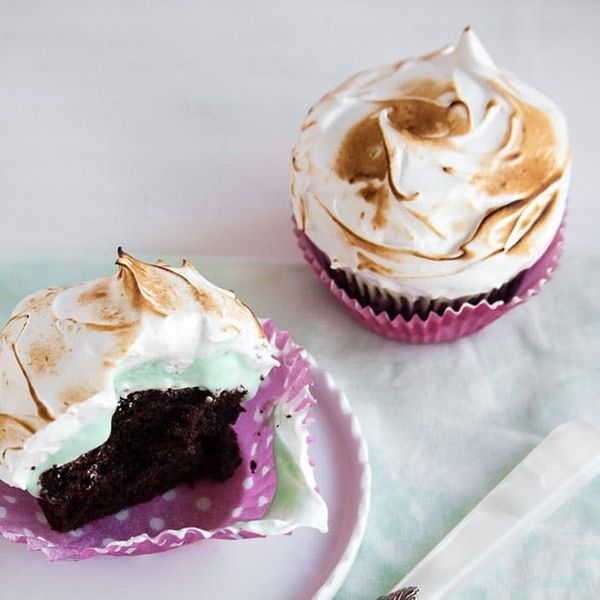 What better way to impress your guests than with a bit of fire and ice? This modern, mini version of the incendiary classic is perfect for your next summer event. And if you ask us, any excuse to bust out the kitchen torch is a good one. These individual Baked Alaskas have all the best qualities of their namesake — cake, ice cream and toasted meringue — all wrapped up in a personal-sized package. There are tons of unique ways to flambé and torch your dessert, but using a cupcake as the base makes these Mini Baked Alaskas the next big thing.

For this version, we used a classic chocolate cupcake topped with mint chip ice cream. To customize your own, use whatever flavor of cupcake you’d like and your favorite ice cream before topping with the meringue frosting. For the cupcakes, feel free to use your favorite recipe and bake them from scratch, make them from a box, buy them from the grocery store or order some plain ones from a local bakery.

Note! Do not torch the meringue with the cupcake sitting in an additional liner (as shown) or the paper liner may catch fire.

In the bowl of an electric mixer, place the egg whites.

Add in the sugar.

After heating the egg mixture to 155 degrees over a double-boiler, beat on high until soft peaks begin to form. Add in the cream of tartar and vanilla extract.

Continue to mix until medium-stiff peaks form. The outside of the mixing bowl should return back to room temperature when done, about six to eight minutes.

Once set, lightly toast each cupcake with a kitchen torch. When torching, be sure not to keep the flame in one spot for too long. Try keeping the flame about six to eight inches away from the meringue until you find an appropriate distance and flame length that works for you. Pro Tip: Instead of using a kitchen torch, try placing the cupcakes on a baking sheet and bake in a 500 degree oven until lightly toasted (this should only take a few minutes).

Do not torch cupcakes while they are sitting in an additional cupcake liner. Once complete, pop your finished cupcake in a festive wrapper.

What flavor cupcake and ice cream would you use to make these treats? Let us know in the comments!