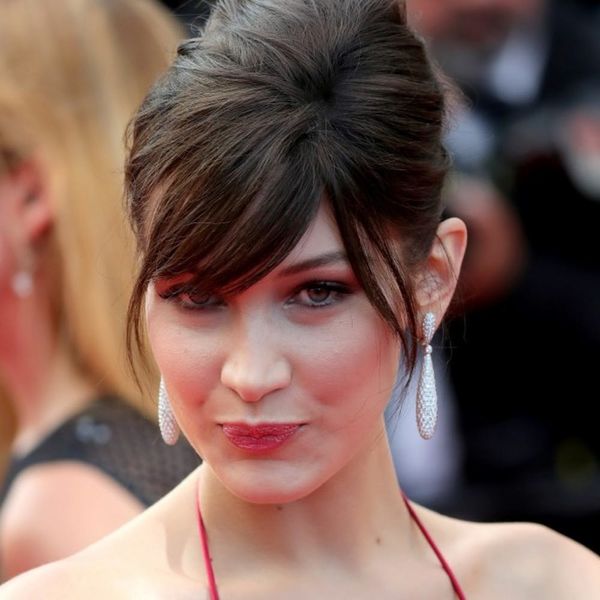 Every celeb hopes to get some exposure while at Cannes, from Julia Roberts and her barefoot red-carpet appearance (footwear freedom, y’all) to Blake Lively’s top five looks (even though she’s currently taking some heat for her “Oakland Booty” comment). But Bella Hadid almost got TOO much exposure in her latest revealing dress.

While attending the premiere of The Unknown Girl (La Fille Inconnue), 19-year-old Bella stunned the crowd in a silky fire-engine-red dress that looked as if it was floating against her skin. But it wasn’t quite the color or the softness of the material that had a few eyes popping. It was the risque cut and the skin it showed (and, um, almost showed off).

With a top section that gently crossed across her chest, the neckline was veeery low, and at times Bella had to adjust things to make sure her breasts stayed behind the fabric. But it was the VERY high up-to-the-hip slit that was causing everyone to wonder if a wardrobe malfunction was about to occur.

Posing every which way, including giving a cheeky bend in front of the photographers, Bella’s long legs accentuated perhaps the highest slit ever, which was always just an inch or two away from exposing parts that she probably had no intention of flashing to the entire world.

At one point, Bella even placed her hand strategically so that the cameras just in front of her couldn’t nab themselves an improper angle.

Thankfully, the universe (and apparently the wind) was on Bella’s side, and there were no crotch shots for the paparazzi this time around. As gorgeous as she looked in the dress, a different, less risky (cut-wise, not fashion-wise) dress may have made for a more comfortable red carpet walk for the star.

Have you ever had a crotch-exposing fashion slip-up? Tweet us @BritandCo!