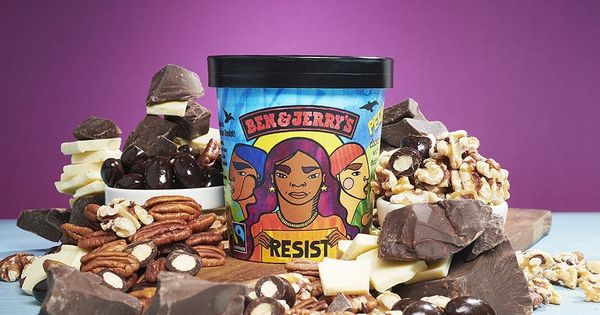 While the current political climate is anything but sweet, Ben & Jerry’s is out to make a difference with its new ice cream flavor, Pecan Resist, a chocolate ice cream with white and dark fudge chunks, pecans, walnuts, and fudge-covered almonds. At its core, Pecan Resist is about supporting activism and “bringing deeply important values to freezers across the country,” the brand said in a press release. If you’re looking to make your ice cream habit an agent for good, read on.

Proceeds of the limited-batch ice cream, which will be available in scoop shops across America and for purchase on Ben & Jerry’s website, will go toward four organizations promoting social justice for people of color, Indigenous communities, and women as well as climate change: Color Of Change, Honor the Earth, Women’s March, and Neta. Ben & Jerry’s commits to donating $25,000 to each.

“This flavor supports groups creating a more just and equitable nation for us all, and who are fighting President Trump’s regressive agenda,” the company added in a Facebook post. “We cannot be silent in the face of the President’s policies that attack and attempt to roll back decades of progress on racial and gender equity, climate change, LGBTQ rights, and refugee and immigrant rights – all issues that have been at the core of our social mission for 40 years.”

So, don’t feel guilty about indulging in ice cream. It’s for a really great cause.

Will you try the new flavor? Tweet us @BritandCo to let us know.