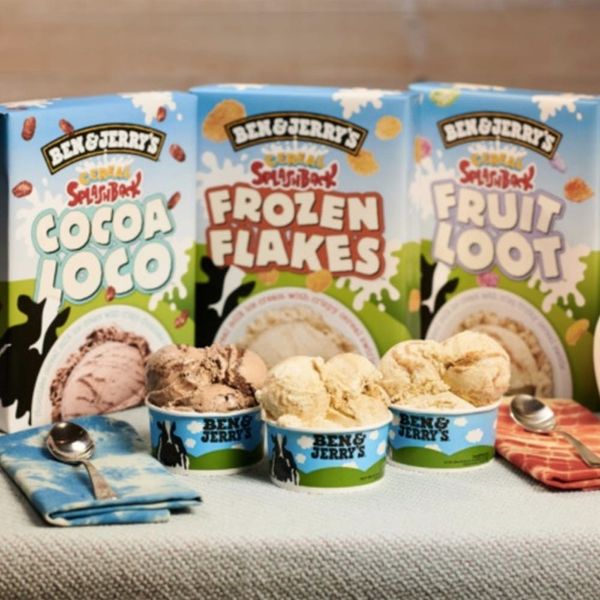 We thought Ben & Jerry’s had released the ultimate trio with their Oat of This Swirled, Urban Bourbon, and Truffle Kerfuffle flavors. But now, ice cream lovers (mmm, ice cream!), prepare yourself for the ultimate treat: Dessert for breakfast! That’s because Ben & Jerry’s has just introduced three new cereal-inspired flavors that will make you want to start your day with a scoop or two (or three!).

Get ready to fill your cereal bowl with Fruit Loot, Frozen Flakes, and Cocoa Loco ice cream (you can probably guess where the inspiration from each comes from). According to the Ben & Jerry’s folks, “Cereal Splashbacks are three cereal-inspired flavors that pay tribute to some of the most iconic and delicious cereals.” Made with milk ice cream and real cereal pieces, we’re absolutely loving that this treat has combined two of our fave foods.

Is it breakfast? Is it dessert? Is it all a dream? . Whatever you want to call it, we have 3 NEW cereal milk flavors, only at Ben & Jerry's scoop shops. Launching in the US - check the link in our bio for more info.

While Fruit Loot is a fruity-flavored cereal with a swirl of crisp fruit cereal, Frozen Flakes is a simple milk ice cream with a swirl of cornflake-like crisps. Finally, Cocoa Loco is a chocolate ice cream that has an added swirl of chocolate cereal. With the smooth ice cream and crunchy cereal bits creating a deliciously contrasting texture combo, you’ll definitely want to give this treat a try.

They’re available today in Scoop Shops across the country, and we can’t wait to enjoy breakfast for dessert and dessert for breakfast.

Do you like the sounds of Ben & Jerry’s Cereal Splashback ice cream? Let us know @BritandCo!

Desiree O
Desirée O is a ‘Professional Bohemian’ who loves anything and everything related to the arts, entertainment, and pop culture. She ADORES being a ‘Newsy’ for Brit + Co, covering all of the latest tidbits of awesomeness that you want to read about. When she’s not writing, she’s either making messy art, going on long adventurous walks with her camera, or poking around over at bohemianizm (http://www.bohemianizm.com/). You can find out about Desirée O and her work at http://DesireeO.com/ or follow her on Twitter @DesireeO.
Ice Cream
Food News
Ice Cream
The Conversation