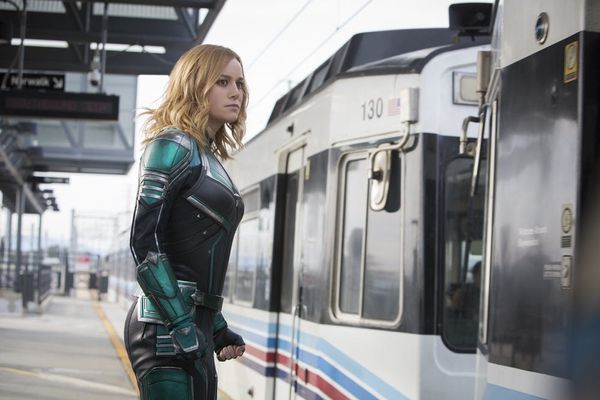 As the March 8 release date for Captain Marvel creeps closer, we’re getting another look at what to expect when Brie Larson suits up as the superhero. In the latest trailer, Carol Danvers shows off the extent of her superpowers — and her sassy wit.

The trailer opens with Carol riding her motorcycle to a bar, where she meets S.H.I.E.L.D. agent Nick Fury (Samuel L. Jackson). The two discuss the impending Skrull invasion of the planet — but not before greeting each other with sarcastic one-liners, a trend that continues throughout the clip as they dryly, and lovingly, roast each other.

“Prove you’re not a Skrull,” Fury says to Carol, who responds by casually shooting a blast of energy from her hand.

“That’s a photon blast,” she deadpans. “A Skrull cannot do that.”

“And I’m just supposed to take your word for that?” Nick retorts.

Later in the trailer, Carol fully flexes the powers that make her one of the Marvel Universe’s strongest superheroes, including not only her photon capabilities, but also her superhuman strength and, of course, the power of flight.

Additionally, the new trailer gives us a hint about the film’s tie-in with the upcoming Avengers: Endgame sequel. The previous Captain Marvel trailer ended pointedly with a nod to the previous Avengers film Infinity War, with Carol saying, “I’m not gonna fight your war. I’m gonna end it.”

Are you excited for Captain Marvel? Let us know @BritandCo!