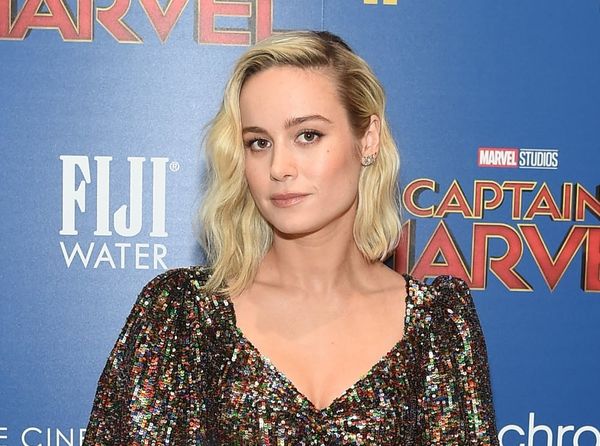 Captain Marvel blasted its way to a $455 million global debut over the weekend, as fans flooded theaters all over the world to see the first woman-led film in the Marvel Cinematic Universe. Some of those fans got an extra treat when the movie’s star, Brie Larson, showed up at screenings to surprise audiences and serve popcorn.

As seen in a video that Marvel posted to Instagram on March 9, Larson dressed up in a Captain Marvel-themed tracksuit to drop in on moviegoers. As she walked into the theater, casually sipping from a giant cup with her face on it, fans began to cheer and scream and snap pictures.

“I just heard that I was on the cups and popcorn and wanted to see for myself,” she joked. “Thank you so much for coming. You guys are so awesome to come opening weekend.”

#CaptainMarvel herself, @BrieLarson, popped into theaters on Saturday night to surprise fans on opening weekend! #HigherFurtherFaster

According to Twitter she also showed her gratitude to audiences by getting behind the counter at the concession stand. “The ultimate #CaptainMarvel experience!” the Captain Marvel account captioned some photos. “@BrieLarson helped fans get their popcorn and soda on opening weekend.”

The ultimate #CaptainMarvel experience! @BrieLarson helped fans get their popcorn and soda on opening weekend. #HigherFurtherFaster

Several thrilled fans took to social media to share their experience with the Oscar-winning star. One Twitter user posted a collection of photos with Larson and wrote, “Honestly, the fact that Brie Larson went to the theaters just to surprise fans on opening weekend speaks volume[s]. She didn’t have to do this at all but she did. Also her smile with the girls. Again, this is why rep is extremely important. Nothing but respect for my Captain Marvel.”

No doubt the feeling is mutual. Prior to the movie’s opening, Larson explained how playing Carol Danvers had changed her, both physically and mentally. “In particular, getting strong, learning how to stand my ground, own myself, and value my voice — those are things that I learned from her,” she told People. “I’ve been very open about the fact [that] I’m an introvert, I have asthma, and I was able to push myself further than I thought possible. I’m excited to share her with the world.”

RELATED: These ‘Captain Marvel’ Character Posters Are Out of This World