These New 'Captain Marvel' Character Posters Are Out of This World 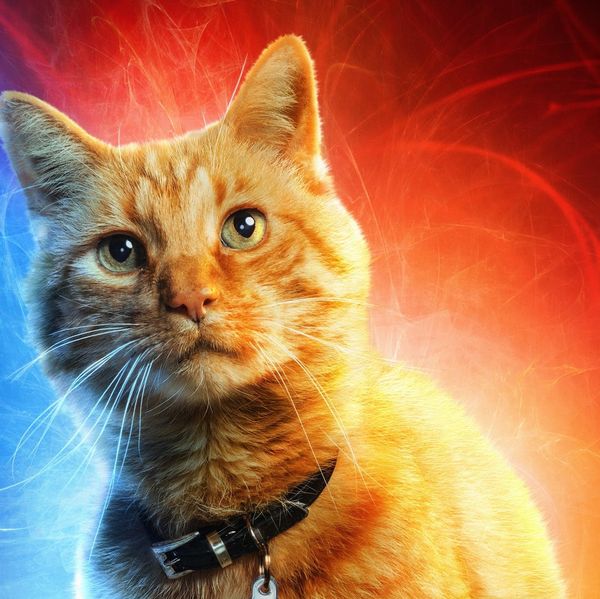 Captain Marvel, Marvel Studios' first female-led film, will hit theaters on International Women's Day, March 8, 2019. But in the meantime, the studio has just released 10 new character posters — including images of Jude Law, Annette Bening, Goose, and Gemma Chan. Click through to see them all! (Photos via Marvel Studios)

Brie Larson as Carol Danvers, AKA Captain Marvel: Academy Award winner Larson plays the title character, whose mysterious abilities (like shooting energy out of her hands) make her one of the most powerful fighters in the war between the Skrulls and the Kree. (Photo via Marvel Studios)

Samuel L. Jackson as Nick Fury: Jackson reprises his role as S.H.I.E.L.D. agent Nick Fury, a character he has played in eight other Marvel Cinematic Universe films to date. Since Captain Marvel takes place in the past, though, he still has his eye and doesn't need a patch. (Photo via Marvel Studios)

Jude Law as Starforce Commander: Not much is known about Law's character, but there are (unconfirmed) rumors that he's playing Mar-Vell, the original Captain Marvel. Law himself has been tight-lipped, telling Entertainment Weekly that his character is simply a "devout warrior — unquestioning, conservative, but inspirational." (Photo via Marvel Studios)

Annette Bening as an Unknown Kree Character: Bening's character is another mystery. All we know from the trailers is that she and her team found Carol Danvers, near death and with no memory, and made her into one of them — a Kree. (Photo via Marvel Studios)

Ben Mendelsohn as Talos: Mendelsohn appears in the film as a shape-shifting Skrull alien who works undercover within S.H.I.E.L.D. (Photo via Marvel Studios)

Clark Gregg as Phil Coulson: Fans of the Marvel franchise will recognize Gregg from his previous appearances as Phil Coulson on both the big and small screens. In this film, though, he's still a rookie agent for S.H.I.E.L.D. (Photo via Marvel Studios)

Djimon Hounsou as Korath: Hounsou appears as Korath, a role he first played in Guardians of the Galaxy. Korath was a villain in Guardians, but here he's a Kree member of the Starforce team. (Photo via Marvel Studios)

Goose: Goose may look like a cat, but it's actually a Flerken — an alien creature that resembles a cat. (Photo via Marvel Studios)