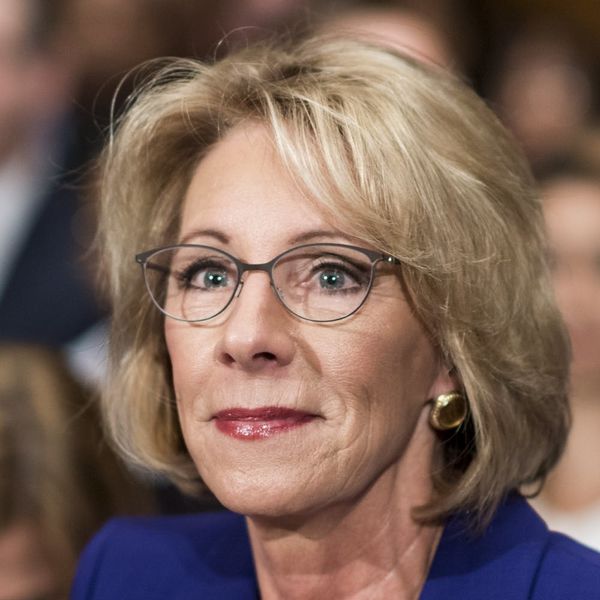 This article is part of our B+C Community Voices project. All of these stories come from our readers in response to our request for op-eds from different viewpoints. This one comes from Casey Boland who is a Dallas-based teacher, a student of life, a world traveler, and a fierce advocate for education for all.

Humanity fascinates me, and I am in love with it. People are my passion, so I chose to see to their well-being as my life’s vocation and mission. This commitment (and my skillset) drew me like a magnet to public education, where I have been for 18 years.

I live my passion in a spot on the globe that is an endearing mix of old-school and progressive, sinners and saints, innovative pragmatism and absurd clusterf***ery. We have Daughters of the American Revolution members and refugees, McMansions and shantytowns, religious zealots and hard-core atheists. And my respect for the people who make up this mini-UN borders on reverence.

So when Betsy DeVos was appointed as Secretary of Education, every protective instinct in my body came alive. Mrs. DeVos is a loud and proud supporter of pulling funds away from the vast majority of students to give to a small, already privileged few. She advocates a private charter system that demonstrably harms all students, but especially the poor and educationally fragile. She gleefully supports siphoning these public funds to bankroll conservative Christian private schools. And the rotten cherry on top? She has absolutely no experience with public schools – neither as a student, parent, nor educator. The disrespect this appointment shows to voters and students and parents and teachers is evident in the myriad of angry town hall meetings, op-eds, and articles. In the spirit of “choice,”, let me unpack my points, and you decide.

1. It was disrespectful to voters. A huge group of bipartisan voters from all over the country made it clear to Senators that they didn’t want someone so clearly unqualified to be confirmed. Even ignoring her lack of any public school experience, Mrs. DeVos demonstrated her lack of understanding of the ins and outs of public education in her oral and written testimonies. Had those been her answers in a job interview for a public-school position, she wouldn’t have been hired by any credible administration. Despite knowing these concerns, 50 Senators voted against the expressed wishes of their constituents, and Vice President Pence backed them up. That is unsettling in a democracy.

Case in point: Google “Dallas Senator Gets Salty with Richardson Students During a School Choice Talk”. He was in a public discussion with PTA parents and students from schools in his district. You don’t even have to read the article; just watch the video and let the Senator’s words and demeanor speak for themselves.

2. It was disrespectful to public school employees, who now have a “CEO” who is not qualified to be their leader. Imagine if your boss passed over qualified applicants to put his inexperienced son-in-law in charge of your business. That would show a lack of respect for the talent and mission of the qualified employees. Practically speaking, how would anyone with no firsthand working knowledge of public education make good decisions for most of our kids? Because educating our kids is ultimately what this is all about. Secretary DeVos doesn’t know the true scope and breadth of what public schools are tasked with doing, which is educating EVERYONE. She doesn’t know the challenges of the vast diversity, the crushing and illogical standards (which private organizations don’t have to meet), and the inadequate funding, given all that public schools are expected to do. Her main qualification seem to be that she is on board with taking scarce resources away from the schools that try to educate most American kids, in order to give a supplement to a small group of schools that cater to a comparative handful of kids. (This is what “school choice/vouchers” will effectively mean.)

3. It was disrespectful to public school students and parents. Think about a time your child had an unqualified teacher, principal, or coach. It’s doubtful you felt respected by that district for giving someone you view as incompetent authority over your child. Now imagine you had proof through her words and deeds of this employee’s incompetence. Imagine this employee also had the inclination and power to take needed resources away from your child. Imagine you and other parents had documented these concerns and frequently brought them to the Board’s attention, yet they doubled down on the decision to keep this educator in her job. The disrespect you would’ve experienced would have been palpable, and you would have a legitimate concern that the district didn’t have the best interest of your kids as their motivation. Now replace “teacher, principal, or coach” with DeVos, and here we are.

4. It was disrespectful to those who fought against the discriminatory practices of “local control.” Ask parents of students with disabilities how long and hard they had to fight local control in order to get a proper education for their children. Ask people of color if they want to go back to local control of the socio-economic makeup of schools. Ask free-exercise clause advocates if they want to go back to local control of religion in public schools. The federal government has had to step in when local communities could not or would not play fair. The Individuals with Disabilities Education Act (IDEA) exists because local school districts wouldn’t provide adequate access nor education opportunities for students with disabilities. Brown vs Board of Education and the federal laws that sprang from it had to happen because local communities actively resisted integration and equal education for all. Engel vs Vitale had to become the law of the land before children were free from local government control of their faith. “Local control” of education sounds fine, until you remember the shade thrown on millions when the federal government was not involved.

5. It’s disrespectful to those who are being fed half-truths about “school choice.” The government is not going to give a family the full cost of sending a child to a private school. In Texas, SB3 is only a “supplement to the full tuition”, or a tax credit. Either way, families will be expected to kick in money most of them don’t have. This idea will only benefit those who are in a position to pay for private schools but want a little help. As for private charter schools, 20+ years of data, including the charter school experiment DeVos lead in Michigan, proved, at best, no more successful than public schools. They leave out that a private institution doesn’t have to accept a kid, and can easily kick a kid out. And, again, they pull scant resources from the vast majority of kids to supplement a few. Politicians are aware that the public is unclear that school choice comes with such a cost, yet they do little to clear up the misconception. They are playing politics with our kids’ futures, and that is disrespectful.

The unrest that has erupted in America was foreseeable. Passions run high when the futures of our kids are at stake. With so many legitimate reasons for Senators to have voted against DeVos’ confirmation, it’s hardly surprising so many are upset that she was confirmed. And it does make you question the intent of those who looked at the whole board and still opted for a choice that only benefits a few.