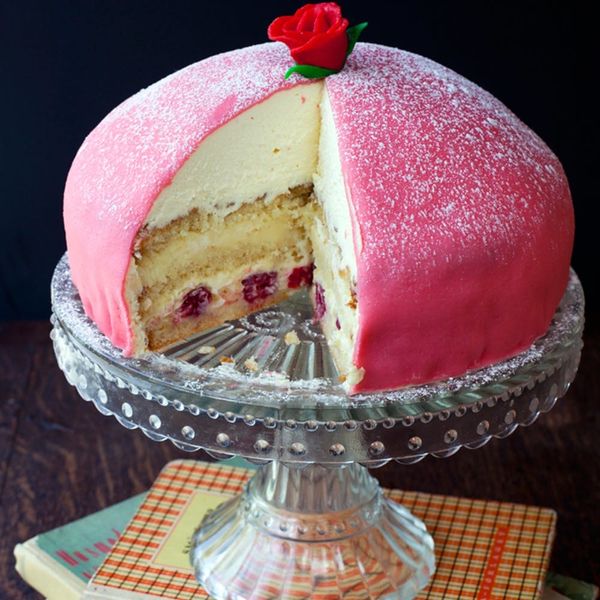 With so many reality cooking competitions and celebrity chefs on television, it might seem like too much of a commitment to add another show to your queue. But what if we told you The Great British Baking Show is the best cooking show you’re not watching? For the uninitiated, The Great British Baking Show is a British baking competition made up of amateur bakers who are so humble and lovely to each other, you might forget it’s a competition — if only until someone plates a cake that is raw in the middle. After binge-watching a few episodes, you’ll probably want to try your hand at a few of these recipes.

1. Traditional Battenberg: Characterized by its two-check pattern, this cake is made of a light sponge cake and covered in marzipan. It’s a great addition to any afternoon tea party with the girls. (via What the Fruitcake?!)

2. Baumkuchen (Tree Cake): Baumkuchen, also called schichttorte, is very fun to say in a German accent. You can see why it literally means “tree cake.” Look at those rings! This was one of the most difficult challenges on TGBBS, and possibly real life too. (via The Kiwi Cook)

3. Chocolate Layer Cake With Swiss Buttercream Frosting: This layer cake is actually a form of genoise, an Italian sponge cake named after the city Genoa. The cake is the foundation for many French and Italian desserts, like tiramisu and Jaffa cake. If you’re planning on becoming Star Baker, you might want to master this one! (via A Brown Table)

4. Cornish Pasties: No, there isn’t an “r” missing, but you’d be hard pressed to find these at a Burlesque show (sorry, we had to). These little guys are delicious! Fill with beef and potatoes for a classic flavor, or do like Nancy and try a variation with duck and Asian spices. (via Kitchen Sanctuary)

5. Rosca De Reyes: Rosca de reyes is usually a sweet cake decorated with candied fruits, but you can make it savory like Luis did in the episode about bread. It’s the Spanish version of king cake, and like king cake, you should place a small, Jesus-like trinket inside. (via Ginger & Bread)

6. Kouign Amann: This is a Breton pastry made with laminated dough, similar to puff pastry. When baking, exercise patience so the layers cook evenly and the outside doesn’t burn. The male judge does NOT like his Kouign Amann burnt. (via A Dutchie Baking)

7. Manchester Tart: Made with a shortcrust — a crust that has no leavening agent so it does not rise — this tart is simple yet decadent. It’s layered with jam, custard, coconut flakes and the original cherry on top: a Maraschino. (via The Brunette Baker)

8. Dobos Torte: These Brits really love their layers, as seen in this Hungarian sponge cake. We love them too because there’s more creamy chocolate buttercream in every bite! (via Smitten Kitchen)

9. Egg Liqueur Gugelhupf: While it has a strange (to us!) name, Gugelhupf is just a marbled bundt cake. (via Foodal)

10. Prinsesstårta, Swedish Princess Cake: Princess cake is a really labor-intensive cake. Even more daunting is the few hours the contestants had to assemble this. The cake consists of layers of sponge cake and pastry cream, a dome of whipped cream and a not-too-green marzipan blanket. Cheers to you if you can pull it off! (via Donal Skehan)

Have you made any of these baked goods before? Tell us in the comments!