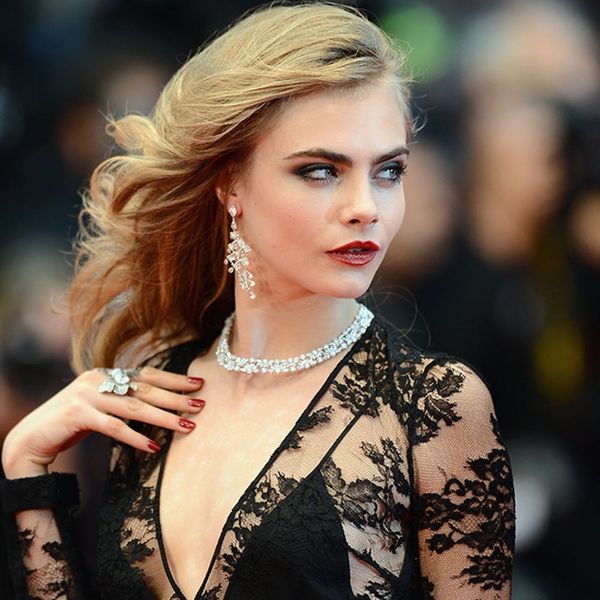 At Sundance Film Festival we typically see shots of celebs bundled up in their warmest jackets, but at Cannes, it’s an entirely different story/red carpet. In stark contrast to the casual vibe played up in Park City, the red carpet in France is packed with A-listers showing off their most glamourous looks. While the fashion is undoubtedly a sight to see, the hair + beauty debuted at the festival is something not to be missed as well. With the 2015 Cannes festivities kicking off in just a few days, we wanted to look back on the 10 best beauty moments from past years. From Blake Lively’s epic braid to Cara Delevigne’s vampy makeup, prepare for some serious beauty inspiration.

1. Diane Kruger’s French Roll: Diane Kruger is kind of the unofficial queen of Cannes. Whenever the actress hits the red carpet she always debuts a totally gorgeous new look. This elegant, Edwardian-inspired hairstyle Kruger rocked back in 2012 might just be our favorite. (Photo via Pascal Le Segretain/Getty)

2. Blake Lively’s High Braid: Adding a high-fashion spin to the athletic hairstyle, Blake pulled up her long locks into a high pony that was then twisted into a tousled braid at last year’s festival. (Photo via Michael Buckner/Getty)

3. Amber Heard’s Red Lip: The red lip is nothing new, but when it’s done just right the results are nothing short of magical. At last year’s Two Days, One Night premiere, Heard mastered the look by keeping the rest of her makeup super minimal, letting her lips do all the talking. (Photo via Andreas Rentz/Getty)

4. Cara Delevigne’s Smokey Makeup + Side Swept Curls: Talk about a killer combination. Delevigne really went for it at The Great Gatsby premiere back in 2013 in a black lace dress with dark lips + eyes and dramatic curls pinned to one side. While this could easily be too much, Cara managed to pull the look off brilliantly. (Photo via Ian Gavan/Getty)

5. Marion Cotillard’s Bouffant Ponytail: At the premiere for L’Homme Qu’On Aimait Trop last year, Cotillard debuted this bouffant ponytail that was wasn’t just teased but also wrapped with a headband made of hair. (Photo via Pascal Le Segretain/Getty)

6. Barbara Palvin’s Orange Eyeshadow: While most of the looks spotted on the Cannes red carpet are typically more classic (red lips, soft curls), Hungarian actress and model, Barbara Palvin opted to try something unconventional back in 2013. The orange eyeshadow definitely wouldn’t work on everyone, but paired with her peachy complexion and auburn hair, the bold look totally works.

7. Emma Watson’s Natural Makeup: Falling on the opposite side of the beauty spectrum, Emma Watson stuck to her classic low-key look at the premiere of The Bling Ring back in 2013 by sporting some super sweet, minimal makeup. Offering up barely there eyeliner and soft pink blush and lipstick, the look is both youthful and super fresh. (Photo via Gareth Cattermole/Getty)

9. Blake Lively’s Epic Chignon: Blake really brought her A-game to last year’s festival. After rocking that epic braid she hit another red carpet wearing a giant side chignon paired with slicked back sides. We’re getting some real old Hollywood vibes from this one. (Photo via Andreas Rentz/Getty)

10. Carey Mulligan’s Knotted Twist: English sweetheart, Carey Mulligan sported this updo at a photocall for Inside Llewyn Davis back in 2013. The style offers a simple and classic look in front, with a whole lot of surprise detailing in back. (Photo via Vittorio Zunino Celotto/Andreas Rentz/Getty)

What major beauty trends are you predicting for this year’s festival? Share with us in the comments below.

Cortney Clift
Cortney is the senior writer and special projects editor at Brit + Co. She typically covers topics related to women's issues, politics, and lifestyle. When she's not buried behind her computer you'll find her exploring New York City or planning her next big adventure.
Red Carpet
TV
Red Carpet