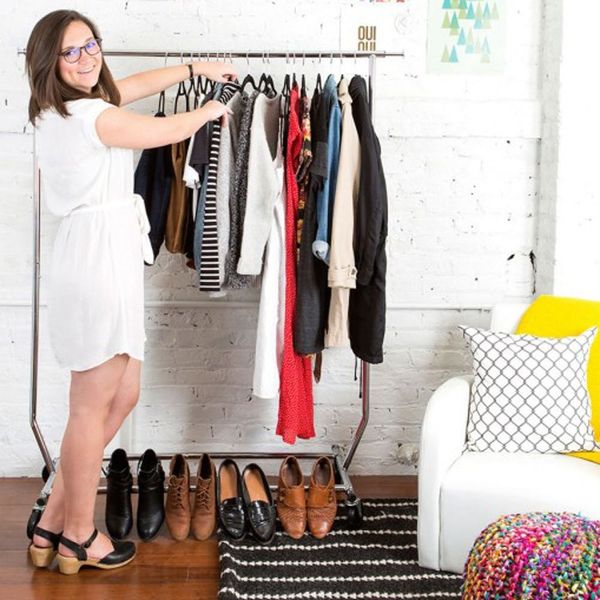 Let me make one thing clear: I’m not a minimal dresser. I totally admire the Everlane aesthetic, but florals and I have a 24-year relationship that’s still going strong. And while I had been toying with the idea of paring my wardrobe down by about 60 percent for awhile, I didn’t think my style suited the currently trending capsule wardrobe challenge. But with the holidays and two weeks of travel ahead of me I decided now would be the time to figure out if a super sparse wardrobe would change my life. And spoiler alert: It did.

I turned to blogger Caroline Rector of the style blog Unfancy to help get me started. Caroline is a bit of an expert when it comes to creating capsule wardrobes. Conveniently, she also has a super useful capsule wardrobe planner that will help walk you through the process. Here are a few of Unfancy’s basic guidelines:

1. Your collection should be worn for three months (approx. one season) and consist of around 37 pieces (that includes tops, bottoms, dresses, outerwear and shoes). Activewear, pajamas and accessories do not count as part of this total.

2. Wear only those clothes for three months (or one month in my case) with no shopping in between.

3. During the last week or two of the season, plan + shop for next season’s capsule wardrobe (try buying about four to eight new pieces).

I started the elimination process by pulling out everything in my closet (yes, EVERYTHING) and throwing it in on my bed. Slowly, I began picking up the pieces I knew I could definitely not live without (i.e my favorite red dress and clogs) and putting them back. I put everything else in a “no” pile and threw that in a box and stowed it away so I wouldn’t be tempted. Caroline selects 37 pieces to wear for three months at a time, but since I was only trying it for one month I decided to narrow that number down to a clean 25. After some tough decisions, my new, lean wardrobe broke down like this: three pairs of pants, five shirts, four sweaters, five dresses, three jackets and five pairs of shoes.

My interest in this idea sparked from a serious case of wardrobe fatigue. I wasn’t excited to wear any of my clothes anymore but obviously didn’t have the funds to undergo a total closet overhaul. Getting dressed in the morning seemed to take forever, and I’d start the day frustrated. Then I heard about the idea of uniform dressing, which you might associate with big-time entrepreneurs like Steve Jobs, Mark Zuckerburg and our blue-and-gray-suited prez, Barack Obama. Basically, the idea is that wearing the same thing every day eliminates stress and frees up brain space to focus on other, more important things. I figured I could use all the extra brain space I could get.

I did this experiment during November, a month in which I had two separate trips planned. Both were around a week long each. My goal was to only bring a carry-on bag each time. Usually, I’m a notorious over-packer. Because what if you get to your destination and you just REALLY want to wear that dress you haven’t even thought about in three months!? Well, when you only have 25 pieces, packing light is a lot easier. I left a few pieces behind, but for the most part, I was able to fit almost everything in my carry-on each time. And you know what? I didn’t even actually need to bring as much as I brought. Here are a few photos from my travels so you know that I’m telling the truth :)

Of course, while I was packing I had a mild panic attack that I’d get to my destination and have nothing to wear. But in reality it was so freeing not to overthink my outfits in the morning. During my trip to the south (which you can see on Instagram under the hashtag #cortingthesouth… just saying) I was with my sister in Texas for three days and my BFF in New Orleans for the other four. So hey, I’ll admit I rocked some repeat outfits, but no one really knew (until now, that is).

Speaking of repeat outfits, that was obviously a concern. But like everything else in this experiment, I was pleasantly surprised. I was hesitant to select only basics because I’m a MEGA fan of florals, color and super unique patterns. But at the same time, I didn’t necessarily want to choose a dress that was a total peacock piece that I could only wear once or twice. So my wardrobe ended up being a bit of both. I kept my favorite floral sweater (which as you can see in the photo above, I wore to eat beignets at Cafe du Monde) and a couple of patterned dresses, but I made sure to counteract prints with garments I could definitely wear multiple times a week, like white and black shirts, a classic black sweater, a utilitarian jacket and versatile shoes. If you still don’t believe that there can be variety, check all the different ways I styled these three pieces.

I chose this backless dress as my one formal piece. You know, in case a fancy cocktail party invite arrived in the mail unexpectedly (it didn’t). But I’m still super glad I included it, because I realized that I didn’t have a black skirt in my collection. So on one drizzly day, I paired the dress with tights, a sweater and a jacket to make it cold-weather appropriate.

This one was pretty straightforward. I have a thing for collared shirts, so this was an easy piece that I could wear on its own, under a sweater or as an extra light layer over another shirt.

I was channeling my inner French girl for this one. The outfit on the left is typically my go-to office look (we’re pretty laid back at Brit + Co HQ). Then for an easy switch-up, I paired the shirt with that formal dress pictured above and a pair of tights.

I need to come clean about one thing, guys. I did break one of Caroline’s rules. I bought two new pieces over the course of the month. But in my defense, they were a Black Friday find from Target that was 40% off and a coat from Urban Outfitters that was 60% off, so can you really blame me? Other than these two late additions though, I did wear only 25 pieces for 30 days. And actually, when the month was up I didn’t really stop and pull all my other clothes back down from the box they’d been shunned to. I was enjoying the ease and simplicity that accompanied my new minimal wardrobe.

A month and a half after I started this experiment, the 25 pieces are still a mainstay in my weekly rotation. Now I will rock an extra piece every few days. I think about capsule wardrobes kind of like diets: It’s not exactly realistic to think that I could keep this up forever, but it did force me to rethink my old ways and get back in sartorial shape. So if you’re on the hunt for a 2016 resolution that’s not going to hinder your chocolate intake, this one comes highly recommended from yours truly.

Cortney Clift
Cortney is the senior writer and special projects editor at Brit + Co. She typically covers topics related to women's issues, politics, and lifestyle. When she's not buried behind her computer you'll find her exploring New York City or planning her next big adventure.
DIY Style
More From DIY Style

How to DIY Your Own Hot Summer Romper