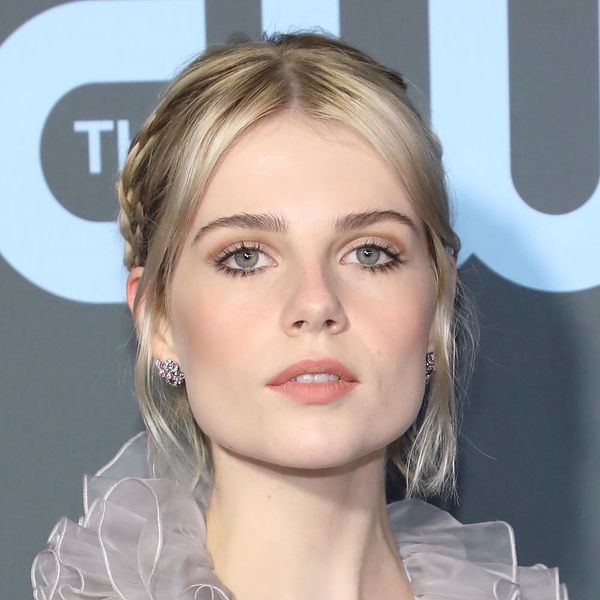 With so many gorgeous gals taking their tresses to the next level with colors, cuts, and styles, it’s only natural to have a major case of hair envy. The Mane Attraction will help you sort through which looks are worth trying with a dive into the latest hair trends taking over the red carpet and Instagram.

In case you haven’t noticed, hair accessories are having quite the moment on the red carpet. And we’re not just talking about headbands, bows, and barrettes; celebrity stylists are using repurposed threads, ropes, and necklaces to make their stars’ ‘dos stand out. And when they do use traditional accessories, they’re employing them in ways we wish we had thought of ourselves. Below you’ll find six creative hair accessory ideas seen on Charlize Theron, Emma Stone, Kiki Layne, and more.

The Tully actress coupled sleek strands with a simple black statement accessory at the 2019 Golden Globes but one question remained: Was it a cuff, or perhaps a coiled hair tie? Celebrity hairstylist Adir Abergel, the mastermind behind Theron’s mane, explained that it’s actually neither. “When I saw the color blocking in the dress, I wanted to create complimentary contrast in the hair with the half up style,” he said. He did so by tightly bounding her hair with a cotton black thread and needle purchased from JOANN Fabric and Craft. (Photo via Steve Granitz/ Getty; Adir Abergel)

For the Golden Globes, The Favourite actress rocked a red carpet hairstyle that looked fresh out of a fairytale by celebrity stylist Mara Roszak. “To go with Emma’s gorgeous custom Louis Vuitton gown, I created ethereal waves for a softness that complements the dress,” Roszak explains. To add the final touch, Roszak wove an Erica Elizabeth Freshwater Pearl Hair Chain ($330) throughout Stone’s hair, though she notes it can be done on a budget. “You can even weave a string of pearls loosely through the back of the hair for a whimsical detail,” she suggests. (Photo via Steve Granitz/Getty; Mara Roszak)

Julianne Moore attended the Golden Globes red carpet in a white Givenchy gown complete with an understated side-parted ponytail wrapped in thread. “Julianne and I felt that wearing her hair up would really show off [her gown] beautifully,” celebrity stylist Marcus Francis offers. “Choosing a ponytail for the Golden Globes felt like it would be glamorous while still feeling effortless and cool.” To capitalize on the laidback-meets-luxe vibe, Francis wrapped a silver thread around the ponytail elastic for a touch of shine. (Photo via Gregg DeGuire; David Crotty/ Getty)

If Beale Street Could Talk, it’d tell Kiki Layne how stunning she looked on the 2019 Critics’ Choice Awards red carpet. The 27-year-old wowed spectators and fellow cast members in a blush beaded Atelier Versace gown topped off with a star-studded hairstyle. “I wanted to give a modern spin to a classic half up half down hairstyle,” celebrity stylist Lacy Redway wrote in an Instagram caption. She used Jennifer Behr Orion Bobby Pins ($142), but instead of inserting them horizontally as they’re designed, she took a vertical approach. “This gave the stars the illusion they were floating above the ponytail,” she added. (Photo via Axelle/Bauer-Griffin; Taylor Hill/ Getty)

star pins and an elastic band on Lucy Boynton

The Bohemian Rhapsody actress attended the Critics’ Choice Awards with a double-sided back braid and creatively placed hairpins. “Lucy’s Gucci dress was so whimsical, [we] had room for the hair to be playful,” celebrity stylist Jenny Cho says. To help secure the braids, Cho used an elastic headband that she wove the braids through for added hold. Once the braids were firmly in place, she placed star pins from the Jennifer Behr Vespera Bobby Pin Set ($258) along the back around the nape for added flare. (Photo via Taylor Hill/ Getty; Jenny Cho)

The Tully actress was back at it again with unexpected hair accessories at the Critics’ Choice Awards. For her show-stopping style, Abergel took inspiration from a Grecian goddess to combine softness with post-modern punk details from four cornrow braids. To finish the otherworldly look, he placed a custom metal Givenchy halo headband below the crown. (Photo via Steve Granitz; Taylor Hill/ Getty)

Do you love these hair accessory hacks? Tell us @BritandCo!

Rebecca Norris
Rebecca Norris is the Beauty Editor at Brit + Co. With a New York apartment that looks more like a Sephora than a home, she's just as quick to roll up her sleeves to swatch all the best bold lipsticks, as she is to hop in a dermatologist's chair to review a vampire facial. After all, anything in the name of a good story, right?
Celebrity Hair
Hair
Celebrity Hair Hair Accessories Mane Attraction
More From Hair

How to Clean Your Hair Brushes, Dryer, and More, According to a Celebrity Stylist

8 Tools, Serums, and Sprays That Celeb Stylists Use for Long-Lasting ‘Dos

The Best Bangs for Every Hair Type