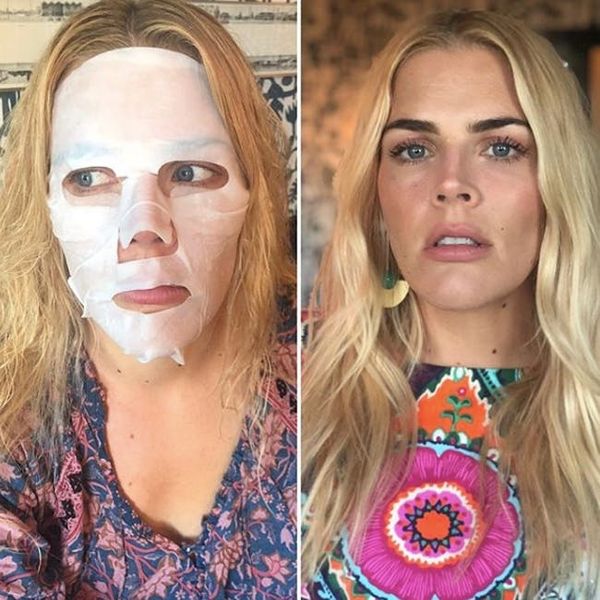 When we think of celebrities, their flawless, seemingly unattainable glam is one of the first things that comes to mind. But, despite what our Instagram feed tells us, they don't wake up like that. Need proof? Search Instagram for #JamieMakeupBeforeAndAfter, which LA-based makeup artist Jamie Greenberg began to change the narrative around celebrity beauty in the most hilarious way possible. "What started off as a real before and after story, quickly became a fun game," Greenberg, who works with Kaley Cuoco, Elisabeth Moss, Busy Phillips, and more, tells Brit + Co. "I posted [photos of] many of my clients without makeup, and people loved seeing their true [appearance] with no interference."
Her followers responded enthusiastically, so Greenberg posted the side-by-sides more frequently, urging her celebrity clientele to have fun with their poses and facial expressions. "I challenge everyone to get silly with their before pictures," Greenberg says, reminding us us all that we need to stop taking ourselves so seriously and start remembering that makeup is fun.
Click through to learn about some of Greenberg's most double-tapped transformations. You might even get inspired to take a before-and-after of your own.
Jane Levy, Before
Jane Levy, After: After embracing her natural hair texture and bare-faced beauty, the former Suburgatory star got glam with Greenberg, showcasing a pop of pink on lids and lips.
Kaley Cuoco, Before
Kaley Cuoco, After: It's only fitting that The Big Bang Theory's leading actress would make quite the splash in her goofy before- and-after. To get the final look, Greenberg paired a thick kitten tip on the upper lash line with defined brows, rosy cheeks, and nude lips.
Chelsea Handler, Before
Chelsea Handler, After: Everyone's favorite funny girl has no problem letting humor seep into her beauty routine. Case in point: this transformative before-and-after that makes us laugh, smile, and wish we were BFFs. You'll notice that her final look isn't dominated by layers and layers of makeup but rather fantastic skin that looks flawless with just a touch. You can thank under-eye gels and a pro MUA for that.
Elisabeth Moss, Before
Elisabeth Moss, After: Sure, Moss might wear a red dress in The Handmaid's Tale, but off the set she's all about a bold red lip courtesy of Greenberg.
Busy Philipps, Before
Busy Philipps, After: A case for glowing skin, the Busy Tonight talk show host proves there's always time to embrace the process to a radiant complexion.
Mae Margaret Whitman, Before
Mae Margaret Whitman, After: Let's be honest, the Good Girls star looks good before and after Greenberg's magic touch. Nude lids balance with bold brows and a statement red lip for one #MOTD that's sure to make you do a double-take.

Would you post goofy before-and-afters to your feed?Tell us @BritandCo!

Would you post goofy before-and-afters to your feed?Tell us @BritandCo!

Rebecca Norris
Rebecca Norris is the Beauty Editor at Brit + Co. With a New York apartment that looks more like a Sephora than a home, she's just as quick to roll up her sleeves to swatch all the best bold lipsticks, as she is to hop in a dermatologist's chair to review a vampire facial. After all, anything in the name of a good story, right?
Celebrity Makeup
Makeup
Celebrity Makeup
More From Makeup