20 Chilled Soup Recipes to Help You Cool Off 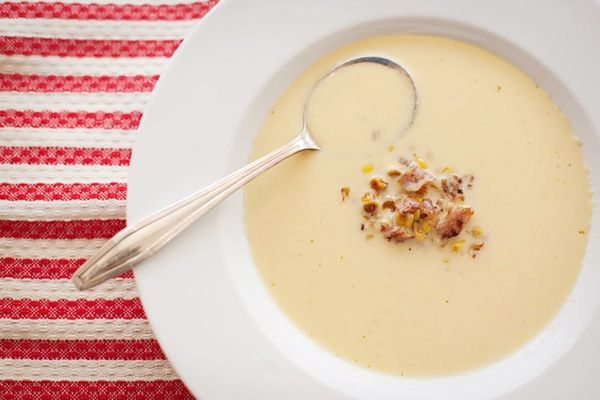 Here’s something you probably already know: When it’s freezing outside we want to warm up, and when it’s incredibly hot we want to cool off. And since we’ve already covered wintery soups with some slurp-worthy recipes, plus warmer days are on their way, it seems about right for us to help you out with some of the chilled variety. If you haven’t had cold soup before, let us promise you that the hot stuff is quite delicious when served chilled. We’ve got 20 fantastic recipes to show you how to experience some straight from your own kitchen.

1. Chilled Fennel Soup With Buttered Walnuts: Fennel is one of those things that everyone forgets exists outside of restaurant salads. We’re bringing around some fennel awareness with this soup, topped with buttered walnuts. After one slurp of this, you won’t ever forget about fennel again. (via Framed Cooks)

3. Mix + Match Melon Soup: Melons are the superstars of summer fruit, as depicted by this beautiful mix-and-match soup above. Check out how great cold soups look in beverage glasses. So good. (via The Nutrition Professor)

4. Apple, Carrot and Ginger Soup With Cashew Dukkah: Apples, carrots and ginger are basically the best combination of everything healthy. They go together in drinks, salads and now, a fancy soup. If you’re not sure what dukkah is, we looked it up for you: It’s an Egyptian blend of nuts and seeds, but that’s irrelevant at this point. You’re already sold on the idea that you just gotta try it. (via A Tale of Two Bougies)

5. Cold Asparagus Soup: Soups like this one are excellent for a post-workout snack because they’re both nutritious and light. This one in particular is a lean, mean, green machine. (via Vanilla and Spice)

7. Buttermilk Fennel Vichyssoise: Vichyssoise (pronounced vish-ee-swaaz) is traditionally a thick soup made up of a blend of leeks, onions, potatoes and cream. This one also features fennel, because why not. That fennel awareness movement is up and running, folks. (via Food52)

9. Chilled Beet Soup: Get your napkins ready, everyone. Beets might stain your clothes, but for something this tasty, we’re willing to risk it. (via The View from Great Island)

10. Cold Curried Carrot Soup: This curried carrot soup has the perfect amount of spice — not too much and not too little — definitely Goldilocks-approved. (via Return to Sunday Supper)

12. Chilled Cucumber Avocado Soup: Avocado is always the name of the game. You can never go wrong with nature’s buttery superfood! (via Pickles and Honey)

13. Chilled Tomato and Stone Fruit Soup: Stone fruits are hardly the pits (har, har). Peaches and cherries along with tomatoes come together to make up this delightful little soup. (via Bon Appétit)

14. Zucchini + Sweet Potato Vichyssoise: Vichyssoise, we meet again. This time, with some zucchini and sweet potato added in. Life is good. (via The Simple Veganista)

15. Chilled Minted Sweet Pea Soup: Make this sweet pea soup for your very own sweet pea and he or she will love you forever and ever. (via Betty Crocker)

16. Chilled Coconut Cucumber Avocado Soup: Listen up, kids. Coconut is a magical ingredient. Add it into anything, and your dish automatically becomes better. (via Bite. Eat. Repeat.)

17. Chilled Blueberry Soup: We just had to include a fully sweet dish on this list, or you’d all be disappointed. We wouldn’t do that to ya. (via Megan Peck Cooks)

18. Cold Grilled Vegetable Soup: Since your grill is probably extremely active right now, why not use it to make a chilled soup? (via The Healthy Foodie)

19. Chilled Corn Soup: Corn is the staple of any Midwestern celebration during the dog days. There are about a million ways to be creative with the glorious golden grain, and here’s #1,000,001. (via Sunday Suppers)

Which chilled soup is the coolest to you? Tell us in the comments below!

Sonia Rao
Sonia is a determined, television-obsessed gal on a quest to find the best cinnamon waffles recipe out there. If she isn’t researching the latest fashion trends or avidly crafting, you can catch her curled up on the couch with a few (meaning a billion) cookies, watching the hilarious antics of Leslie Knope or Mindy Lahiri. Sonia loves writing for Brit + Co as much as she loves desserts, and is equally proud of her quirky, pop culture reference-filled Twitter feed.
recipe roundup
Recipes
recipe roundup
The Conversation
More From Recipes