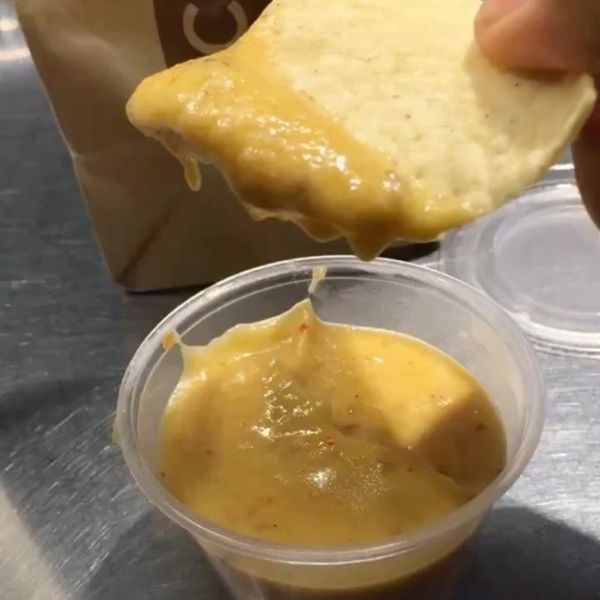 Chipotle continues to tempt our tummies with new items including burgers, chorizo, and even dessert. And now they’ve targeted our love of all things cheesy by testing out queso (something the chain had previously claimed they’d NEVER add to their menu).

The most requested item not currently on Chipotle’s menu, queso will apparently be available as an entrée, on the side, or with chips. Yum, yum, and YUM!

“All of our competitors sell queso, and we know some customers don’t come to Chipotle because we don’t offer it,” said Chipotle CEO Steve Ells in an internal memo, according to Eater New York. “But because we refuse to use industrial additives, added colors, flavors or preservatives in our food, it’s very difficult to make queso that meets our standards.”

Chipotle is testing out queso! Head over to the test kitchen on 13th and 6th! . . . . #chipotle #chipotlequeso #nyc #texmex #foodie

That’s why they’ve taken the queso recipe testing to their brand new Chipotle NEXT Kitchen in NYC, the company’s only public-facing test kitchen, which opened on Monday.

Business Insider reports that the current queso offering is cheddar-based, which gives it a “grainy” texture that’s “closer to a chowder than nacho cheese.” Saying that the graininess isn’t in fact a bad thing, they also note the queso features “savory, rich flavors” that have a “slow, pleasant, smoky burn.” Mmm!

This certainly sounds like an item that needs to make it on the nationwide menu ASAP.

Do you want to try Chipotle’s queso? Let us know @BritandCo!

Desiree O
Desirée O is a ‘Professional Bohemian’ who loves anything and everything related to the arts, entertainment, and pop culture. She ADORES being a ‘Newsy’ for Brit + Co, covering all of the latest tidbits of awesomeness that you want to read about. When she’s not writing, she’s either making messy art, going on long adventurous walks with her camera, or poking around over at bohemianizm (http://www.bohemianizm.com/). You can find out about Desirée O and her work at http://DesireeO.com/ or follow her on Twitter @DesireeO.
Food News
The Conversation
Reviews:
More From Food News