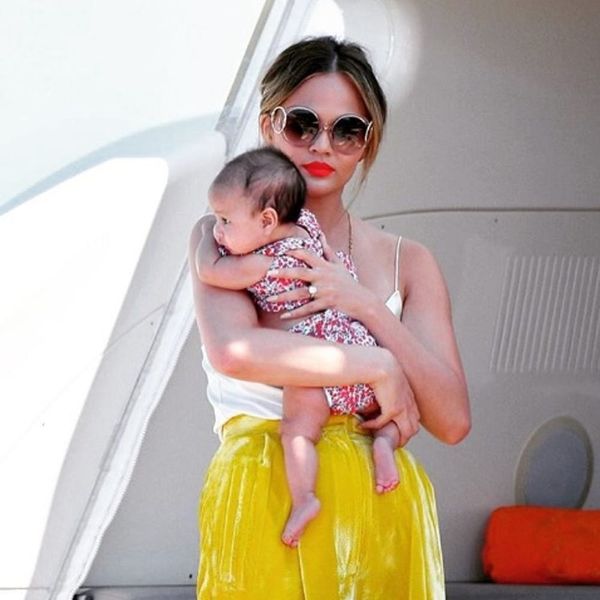 If you’re not already well aware that Chrissy Teigen’s baby girl, Luna, is super adorable, then where the heck have you been? The little Legend has charmed her mom’s fans with her cute face, her super sweet outfits (remember those Halloween costumes?) and general lovability. But it seems like no mother can avoid online criticism along with unsolicited “advice” and Chrissy — who’s faced more than her fair share since Luna was born — just won’t have it anymore. That’s why, while posting a pic of her baby girl who happens to have a very common condition, Chrissy made it quite clear that she doesn’t want any alternative theories, thank you very much.

Thrilling her followers by posting a brand new video of Luna to Instagram, we see the ever-growing little girl sitting up on her own and giving a wave to her daddy, John Legend, who’s away on biz. It even sounds like she’s trying to say “Hi” which is just so sweet.

We miss you, papa!! Can't wait for you to come home! (Yes she has rosy eczema cheeks, yes we are taking care of it, no it's not a gluten allergy, no it's not our makeup, no it's not from our perfume, yes she's just a baby)

Chrissy included the caption, “We miss you, papa!! Can’t wait for you to come home!” But before anyone could comment, she also added, “(Yes she has rosy eczema cheeks, yes we are taking care of it, no it’s not a gluten allergy, no it’s not our makeup, no it’s not from our perfume, yes she’s just a baby)”

And there you go. Eczema is an extremely common skin condition for both children and adults alike that results in rosiness. Teigen makes it clear that she’s on top of the situation and Luna doesn’t seem to be bothered much by it, at least not in the video. And while folks commenting with advice are usually just trying to help, most of the time it’s just not needed. So let’s just focus instead on how wildly cute Luna is when she waves!

Desiree O
Desirée O is a ‘Professional Bohemian’ who loves anything and everything related to the arts, entertainment, and pop culture. She ADORES being a ‘Newsy’ for Brit + Co, covering all of the latest tidbits of awesomeness that you want to read about. When she’s not writing, she’s either making messy art, going on long adventurous walks with her camera, or poking around over at bohemianizm (http://www.bohemianizm.com/). You can find out about Desirée O and her work at http://DesireeO.com/ or follow her on Twitter @DesireeO.
Halloween
Celebrity News
Halloween