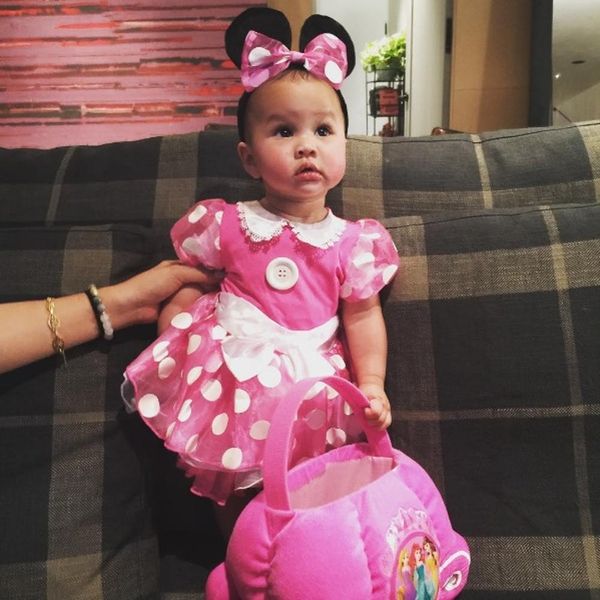 Over the past few days, Chrissy Teigen (who DGAF what you think about her parenting skills) has been thrilling the internet once again with adorable pics of baby Luna. And while this little one needs no added flair to take the adorableness over the top, popping her in Halloween costumes is almost too cute to bear. Seriously, the Minnie Mouse, the banana, the hot dog! So sweet! But when Chrissy mentioned that some of the costumes had been sent to her for free, controversy started brewing and, as always, Chrissy was quick to shut it down.

You can't possibly think I only bought the hot dog

It’s hard to imagine being criticized for something so cute, but people found a way, natch. Though Chrissy assured fans upfront that she would be donating the many costumes “so other families can get the same joy out of them,” there were those who felt it still wasn’t cool that Teigen had received them without paying, since Chrissy can afford to buy costumes.

The model explained that sitch is all about biz and not the companies being uber-generous.

As Chrissy explains, it would be great it the companies matched their gifts to her with donations to needy families, but “all we can do is the best we can on our end.” Totally fair.

I'll take this as a no

.@caseypattersontv and the team at #lipsyncbattle sent an entire scene 😂😂😂 I love you guys so much

What do you think about Chrissy Teigen getting free costumes for baby Luna? Tweet us @BritandCo!

Desiree O
Desirée O is a ‘Professional Bohemian’ who loves anything and everything related to the arts, entertainment, and pop culture. She ADORES being a ‘Newsy’ for Brit + Co, covering all of the latest tidbits of awesomeness that you want to read about. When she’s not writing, she’s either making messy art, going on long adventurous walks with her camera, or poking around over at bohemianizm (http://www.bohemianizm.com/). You can find out about Desirée O and her work at http://DesireeO.com/ or follow her on Twitter @DesireeO.
Halloween
Celebrity News
Halloween Halloween Costumes for Babies
More From Celebrity News