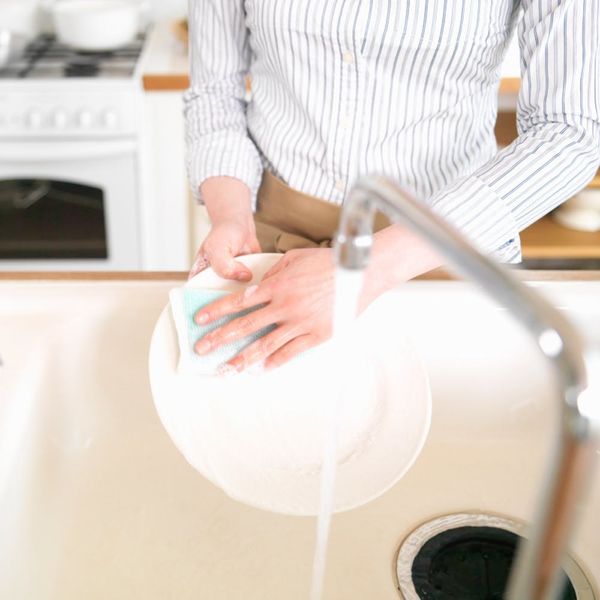 If you’ve been living with another person for any length of time, the issue of the right or wrong way to clean has probably come up at some point. While nothing may settle certain aspects of the debate (like how to fold dress shirts or which rooms to prioritize), research does actually shed light on which cleaning habits are best when it comes to our health — which isn’t too surprising when you consider how much our environment affects our well-being. Long-established cleaning habits die hard, so read on with an open mind, because for your health it could be time to switch up these six practices.

1. Leaving Dishes to Soak in the Sink: Sometimes soaking can be a legitimate attempt to loosen baked-on grime instead of just a classic move to get out of doing dishes, but while leaving items to sit in the sink may help remove visible gunk, it’s not helpful on a bacterial level. According to researchers at the University of Arizona, between 50 and 80 percent of the bacteria that lead to foodborne illnesses are bred in the home — and not necessarily in the places you’d expect. The kitchen sink usually harbors more harmful bacteria than your toilet or even your garbage can, so it’s really not a place you want your dishes to spend time. To keep pathogens to a minimum, sanitize your sink often and wash dishes as soon as possible after use.

2. Not Replacing or Cleaning Your Kitchen Sponge: While we’re on the subject of dishes, let’s tackle an offender that’s (gulp) even worse than the kitchen sink: the sponge sitting next to it. We all know it can get kinda gross, but how gross is it actually? One study conducted in Germany analyzing kitchen sponges found they contained up to 54 billion microbes per square centimeter — and not the friendly kind of bacteria, but the varieties that could make you sick. Researchers at the USDA report that both microwaving a sponge for one minute and placing it the dishwasher with a drying cycle kill over 99.999 percent of harmful microbes. Or, to be even safer, simply replace your sponge more often, especially if it starts to smell.

3. Ignoring Dust: Of all the types of dirt that accumulate in your home, dust can seem the most innocuous. A barely noticeable layer on the tops of shelves, it’s certainly not as unsightly as old, caked-on food on your dishes or as repellent as whatever’s lurking in your toilet. Yet, left unchecked, household dust can pose surprising health risks. Researchers at George Washington University found that indoor dust harbored some 45 toxic chemicals associated with cancer, endocrine disruption, and reproductive toxicity. The study’s authors recommend regularly clearing away the buildup with a damp cloth.

4. Not Washing Makeup Brushes: It’s an annoying task, but cleaning your makeup tools is worth the effort. Dirty brushes can not only lead to clogged pores and more breakouts, but they can actually put you at risk of obnoxious infections like pink eye or scary bacteria like staph. Unfortunately, however, a 2015 poll showed that 22 percent of women never clean their makeup applicators. If you’re among that number, now’s the time to start a healthy habit. Experts recommend cleaning foundation and concealer brushes once a week, eye makeup tools twice a month, and all others once a month. Wash makeup brushes with water and a gentle soap or brush cleanser.

5. Letting Clutter Accumulate: A little clutter is part of normal domestic life, but it can reach a point where it actually affects mental health. Consider for a moment how you feel when surrounded by too much stuff: Anxious? Burdened? Trapped? You don’t have to be a hoarder for an excess of things to induce some pretty negative emotions. A 2016 study revealed that clutter — defined as “an overabundance of possessions that collectively create chaotic and disorderly living spaces” — was negatively related to a sense of home and, therefore, well-being. For a healthier outlook, stay mindful of how much stuff you allow to accumulate in your space. You may find surprising freedom from what you let go.

6. Removing the Good With the Bad: In our efforts to maintain cleanliness, the last thing we want is to strip our bodies of bacteria that are actually beneficial — so there may be instances of cleaning where less is more. When washing fresh produce, for example, don’t feel the need to scrub that poor potato raw. Research shows that consuming a little dirt with our food can protect the intestinal tract against toxins, parasites, and pathogens. Constantly slathering on hand sanitizer and even showering daily may not do your microbiome much good, either, and could result in harmful effects like antibiotic resistance. So, strange as it sounds, keeping some dirt around may actually be the best way to clean.

Do you have a healthy cleaning hack? Tweet it to us @BritandCo.

Sarah Garone
Sarah Garone is a mom, wife, nutritionist, and freelance writer in Mesa, AZ. She loves music and travel, speaks fluent German, and does a lot of running (to counterbalance the surprising amount of cookies she eats for being a nutritionist). Find her sharing great recipes and helpful nutrition info at A Love Letter to Food.
Cleaning
Health
Cleaning Healthy Living
More From Health