Here are All the Coachella Celeb Instagrams From Weekend One 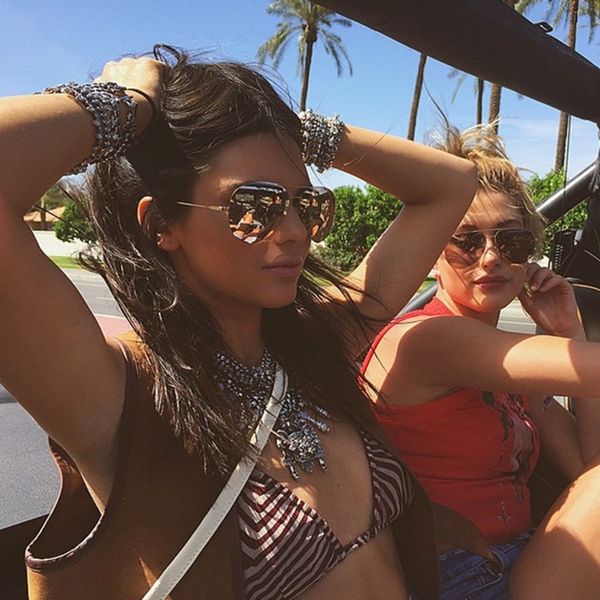 Sadly, not everyone gets to head to the desert for Coachella. Luckily, a lot of our favorite celebs were able to make it to weekend one of the big music fest and, while it’s fun to recreate their Coachella looks, it’s even more exciting — or depressing — to live vicariously through them and pretend we’re all dancing alongside our BFFs with Kylie, Kendall, Gigi + more all weekend long.

1. Kendall Jenner: As highlighted by the model, killing the Coachella style game isn’t only about what you’re wearing but also how you arrive to the desert. (via @kendalljenner)

2. Gigi Hadid: Not only can the model rock forehead jewels, but she also knows how to work it in a simple emoji tee. (via @gigihadid)

3. Jourdan Dunn: Rocking out and looking good with your girl is what Coachella is all about, right? (via @officialjdunn)

4. Beyoncé: Queen Bey knows how to rock a fringe vest. (via @beyonce)

6. Jena Malone: The perfect duo for a music festival, you ask? A sister act, obviously. (via @jenamalone)

7. Alexa Chung: When you get over the crowd, you naturally hop in the DJ booth. (via @chungalexa)

8. Julianne Hough: Pastel hair and florals are not only a great look for spring, but also Coachella. (via @juleshough)

9. Bella Hadid: Nothing like chilling poolside with friends at a private party. (via @bellahadid)

12. Lea Michele: Poolside refreshments are necessary in the desert heat. (via @msleamichele)

13. Fergie: Looking fergalicious in that fringe vest, lady. (via @fergie)

14. Alessandra Ambrosio: Looks like this angel switched her wings at the fest. (via @alessandraambrosio)

15. Katy Perry: It appears that someone had a little reunion with their Super Bowl companion ;) (via @katyperry)

16. Nicky Hilton: Coachella Polaroid selfies are the best kind of selfies. (via @nickyhilton)

17. Paris Hilton: Looks like this kitten isn’t afraid of the water. At least not when it comes to posing. (via @parishilton)

18. Kylie Jenner: The blue haired gal couldn’t complete her fest prep without a selfie before heading out. (via @kyliejenner)

19. Alli Simpson: The singer was clearly feeling the weekend and didn’t want the party to stop. (via @allisimpson)

Which celebs do you think had the best Coachella snaps? Let us know in the comments.