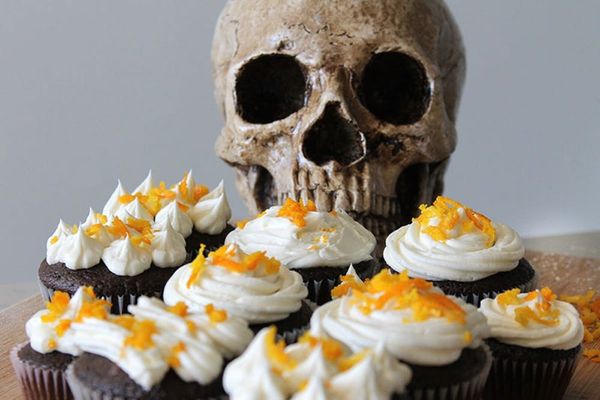 Don’t let these demure cupcakes fool you, they pack quite the boozy punch! Keeping in line with our tricked out Reese’s shooters, we’ve created another spiked masterpiece for your pleasure. While they seem like merely a delicious chocolate cupcake on the outside, the frosting is lavishly made with Cointreau to add a feisty orange flavor. Make sure to warn your guests… or not.

We’ll start with the cupcakes. Mix all the cupcake ingredients together.

Keep mixing as long as you can, preferably until most of the small lumps are all gone. It should turn into one delicious, ooey gooey mass. Doesn’t that look amazing?! If you’re unsure about the flavor, it’s probably time to do a taste test.

Once it’s all well mixed, begin to put them in the cupcake tins.

Bake in the oven at 325 degrees for about 12-15 minutes, or until a toothpick stuck through the center of the cupcake comes out clean. Let the cupcakes cool while you make the frosting. To do so, mix together room temperature butter and Cointreau, and beat by hand or a hand mixer.

When the Cointreau is fully mixed in, slowly add powdered sugar. We added about 3 cups, but add as much or as little to your taste preference.

Once the powdered sugar is fully immersed in the frosting, grate or zest an orange for the garnish.

Now that you’re done with the orange, it’s time for decorating! We used a Wilton frosting tip to frost the cupcakes, but a plastic knife also works just as well! Once done frosting the cupcakes, add some orange zest for flavor, and just ‘cause it’s pretty.

Our buddy Skully was a little hungry, so we gave him a bite too. Nom nom nom.

His eyes were agog with excitement!

While the chocolate and orange colors work well for Halloween, this cupcake is versatile and is great for any event!

What spooky sweets are you cooking up for All Hallow’s Eve? Talk to us in the comments below. And if you give these a try, we’d love to see photos via Twitter or Facebook!

Nanette Wong
Nanette is an all around food enthusiast who loves transforming basic everyday foods into something delicious, and of course, full of sprinkles. You can see more of her at www.nanettewong.com.
Cupcake Recipes
DIY Recipes
Cupcake Recipes Spike Your Sweets
The Conversation
More From DIY Recipes