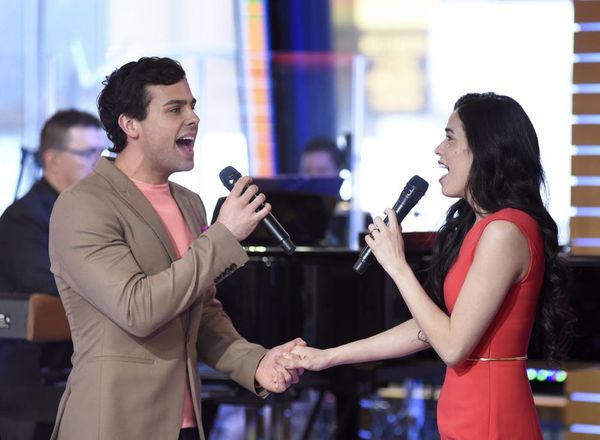 Disney on Broadway is celebrating its 25th anniversary of bringing magical stories to the stage, and to mark the special occasion, stars from some of the shows visited Good Morning America to perform a nostalgic mashup that included music from Beauty and the Beast, Frozen, Aladdin, The Lion King, and more.

The medley kicked off with Ryann Redmond’s enthusiastic rendition of “Be Our Guest” from Beauty and the Beast, followed by Syndee Winters and Bradley Gibson’s duet of The Lion King‘s “Can You Feel the Love Tonight.”

Frozen star Patti Murin then sang a peppy version of Mary Poppins‘ “Supercalifragilisticexpialidocious,” and Arielle Jacobs teamed up with Ainsley Melham for “You’ll Be in My Heart” from Tarzan.

Of course, a mashup of Disney tunes wouldn’t be complete without something from The Little Mermaid, so L. Steven Taylor sang a bit of “Under the Sea” before joining the rest of the ensemble for “Carrying the Banner” from Newsies. Michael James Scott also popped up for Aladdin‘s “Friend Like Me,” and Cassie Levy finished things off with Frozen‘s “Let It Go.”

GMA also shared a few fun tidbits about Disney on Broadway, including the fact that the productions have earned 20 Tony Awards and 60 nominations, and that, since 2004, Beauty and the Beast has had more than 42,000 licensed performances, which is more than the Phantom of the Opera, Chicago, and Cats combined.

RELATED: The First Full-Length Trailer for Disney’s ‘Lion King’ Reboot Will Give You Chills

Desiree O
Desirée O is a ‘Professional Bohemian’ who loves anything and everything related to the arts, entertainment, and pop culture. She ADORES being a ‘Newsy’ for Brit + Co, covering all of the latest tidbits of awesomeness that you want to read about. When she’s not writing, she’s either making messy art, going on long adventurous walks with her camera, or poking around over at bohemianizm (http://www.bohemianizm.com/). You can find out about Desirée O and her work at http://DesireeO.com/ or follow her on Twitter @DesireeO.
Disney
Pop Culture
Disney Movies Music Nostalgia
More From Pop Culture