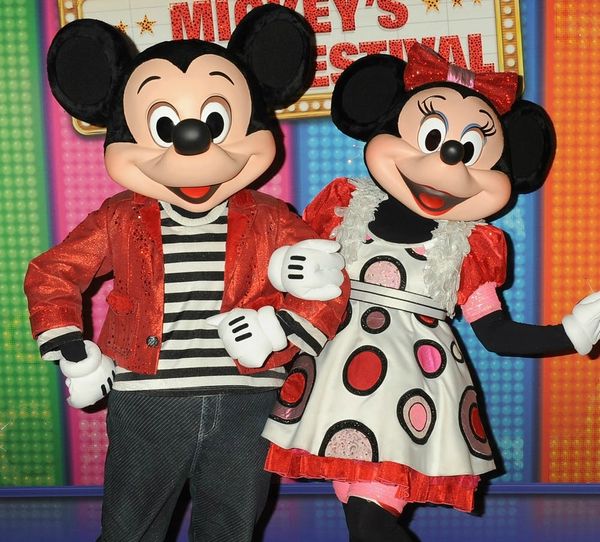 When it comes to genius Easter eggs — those suuuuper sneaky little jokes or references tucked away within the plot of a story or film that only a true fan notices — no one does it better than Disney. For years, the O.G. Mouseketeer and his team have been dropping little references, innuendos and double entendres into their masterpieces — more than we can even begin to count (and we expect some in the newest Disney movie too!). But, in honor of this Easter Sunday, we’re sharing our absolute faves that your inner kid will freak over. Read on to see which precious little nuggets made the cut!

1. Mickey and Minnie: The people who voice the characters of Mickey and Minnie are married in real life. If that’s not the greatest fact ever, we don’t know what is. (Photo by Jemal Countess/Getty)

2. The Hunchback of Notre Dame: This one is a two-for-one special. Belle from Beauty and the Beast makes a cameo as she’s out for a stroll (with her nose in a book, natch) to the tune of “Out There” in The Hunchback, and The Lion King’s Pumba is immortalized in stone as a gargoyle later in the film. (Photo via Handout/Getty)

3. 101 Dalmatians: 101 Dalmatians is not only chock-full of spots, it’s chock-full of fabulous Easter eggs too. For example, among those helping Pongo and Perdi find their stolen puppies in the canine Scottland Yard? Lady and Tramp themselves, who can be seen in the twilight bark scene and their best pal Jock. Later, when the puppies are spotted in a pet shop, you’ll also see Peg, Tramp’s former supposed paramour (pre-Lady, of course!). (Image via Disney)

4. Oliver & Company: Tramp’s gang just can’t stay away from a good dog flick — Jock, Peg and Trusty also make a brief appearance in Oliver & Company. Also tucked away? Ratigan from The Great Mouse Detective and Scooby Doo, who pops up in framed photos during the “Perfect Isn’t Easy” musical number. The hidden gems don’t stop, as Princess Aurora in the flesh casually saunters by in a background shot. And is that… ? Why, yes — yes, it is! Pongo’s here too, chuckling during a song-and-dance ditty. (Image via Disney)

5. Aladdin: If you look closely, when the Sultan is stacking his toy animals (prior to being hypnotized by that no-good rogue, Jafar), you’ll find that one of them isn’t an animal at all, in fact, but the Beast from (what else?) Beauty and the Beast. And did we mention that the character of Aladdin is based on Tom Cruise? (Photo via KevinWinter/Getty)

6. Hercules: Disney World aficionados may pick up on the fact that the singing stone muses in Hercules are positioned the exact same way as the singing ghosts at the Haunted Mansion. The Lion King’s Scar also shows up (albeit dead) as a rug. (Photo via Scott Brinegar/Getty)

7. Frozen: In the credits of Frozen, Disney vehemently expresses that when Kristoff says, “all men eat their own boogers,” that his “views are solely his own and do not reflect the views or opinions of The Walt Disney Company or its filmmakers.” Thank goodness they clarified that for us all! (Photo via Mark Ashman/Getty)

9. A Goofy Movie: The main mouse himself, Mickey, stands out above the crowd (well, in it, but get it?!) in one of the fan crowd shots, and the crocodile from Peter Pan can be seen hiding in the form of a backstage prop. (Photo via Jason Kempin/Getty)

10. The Great Mouse Detective: One of Ratigan’s cohorts reminds us of a certain lizard (Bill) from Alice in Wonderland. Oh, wait. That’s because it IS Bill. You may also spy a bubble-blowing Dumbo in the toy maker’s shop. (Screenshot via Disney)

11. The Little Mermaid: You’ll want to freeze frame King Triton’s entrance into what is supposed to be Ariel’s musical debut, as you may recognize several friendly faces in the audience. There’s Mickey, Donald and Goofy to the king’s left, as well as The Muppets’ Kermit the Frog. Then, there’s Eric’s wedding guests, which just so happen to include Cinderella’s father-in-law and his duke.

Bonus tidbits: Ariel is actually based on a young Alyssa Milano, and Ursula is based on ‘70s drag star Divine. No kidding. (Photo via Toby Canham/Getty)

What other Disney Easter eggs have you spotted in the films? Let us know at @BritandCo!

Nicole Briese
Nicole is the weekend editor for Brit + Co who loves bringing you all the latest buzz. When she's not busy typing away into the wee hours, you can usually find her canoodling with her fur babies, rooting around in a bookstore, or rocking out at a concert of some sort (Guns N' Roses forever!). Check out all her latest musings and past work at nicolebjean.com.
Disney
Movies
Disney Easter Eggs
More From Movies