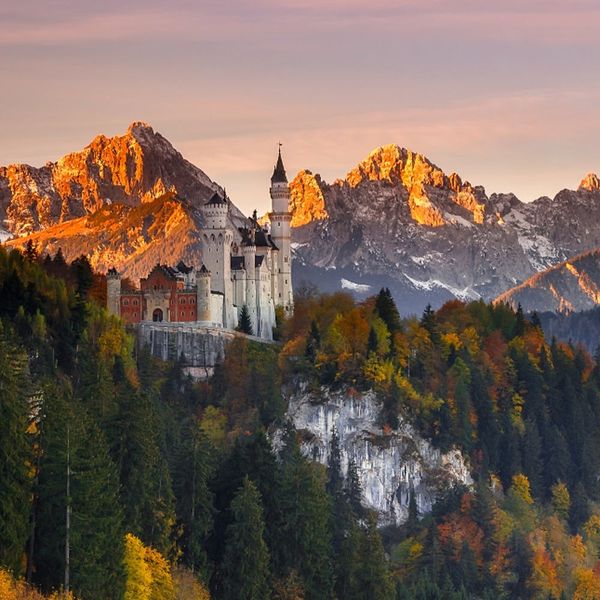 Sure, there are plenty of things to do at Disneyland and Walt Disney World that aren’t rides (especially since Disney World just got boozier)… but we’re betting you line up anyway. You may have considered extending the magic with a vacation inspired by your fave Disney princess or a Disney river cruise, but have you ever thought about where all the design ideas for your favorite attractions came from? It’s one thing to enjoy them in the park, but it’s a whole ‘nother deal to visit their real-life inspirations — and that’s a level of fandom we totally approve of. To speed you on your quest, we’ve collected two dozen locations all over the globe that helped Imagineers breathe life into some of the best of the Disney parks‘ oh-so-epic attractions.

2. Neuschwanstein Castle in Bavaria, Germany (Sleeping Beauty’s Castle, Disneyland): When designing the ultimate fairy-tale castle, Imagineer Herb Ryman looked to this gigantic German keep built by King Ludwig II of Bavaria. It may dwarf the Disney version, but they both share oodles of charm.

3. Château d’Ussé in Rigny-Ussé, France (Cinderella’s Castle, Walt Disney World): This stately manor in France’s Loire Valley was one of the European dwellings whose look was used to create the dramatic and oh-so-lovely castle that looms large in the Magic Kingdom in Walt Disney World. Iconic and incredible.

6. The Amazon, Congo, Nile, and Mekong Rivers (Jungle Cruise, Disneyland): This classic Disney ride pays homage to not one or two but four great rivers — the Amazon, the Congo, the Nile, and the Mekong. Could one river really have piranhas, elephants, and headhunters? We think not. Pick your fave and float downstream.

7. Antebellum Mansions of the South (Haunted Mansion, Disneyland): The opulent antebellum mansions of the American South proved to be perfect inspo for Disney’s curious yet deliciously creepy Haunted Mansion. One house in particular is thought to be the main inspiration for the ghostly dwelling in Anaheim: the Shipley-Lydecker house in Baltimore, Maryland. While the house no longer stands, you can visit several other old plantation homes to totally get that same haunted feeling.

10. Redwood Creek and the Sacramento River, CA (Grizzly River Run, Disney California Adventure): If you’re not brave enough to ride the REAL rapids in the wild, the next best thing is to jump on one of the round (and totes safe) rafts at California Adventure’s Grizzly River Run: Imagineers went to the Redwood Creek and the Sacramento River to get the ride just right. But if you do wanna give it a try, these peeps can help.

12. The Monorail in Seattle, WA (The Monorail, Disneyland): First, it should be noted that Disneyland’s Monorail, which debuted in June of 1959, was the first monorail to be in daily operation in the Western Hemisphere. But this isn’t just some fun ride — Walt Disney thought of it as a transportation solution for the future. Seattle soon followed with their own monorail service in 1962, built for Century 21 Exposition at the World’s Fair, and it still runs today. If you’re jonesing for a Monorail ride, you can always head to Seattle instead of Disneyland.

13. Castillo de San Felipe del Morro in Puerto Rico (Pirates of the Caribbean, Disney World): When you approach Pirates of the Caribbean in Adventureland in Walt Disney World and its impressive Torre del Sol watchtower, you’ll get glimpses of the influence that the real life fort Castillo de San Felipe del Morro in the Old San Juan in Puerto Rico had on the design.

14. Strasbourg, France (Fantasy Faire, Disneyland): To really experience that Fantasy Faire life, all you need to do is head across the pond to Strasbourg in France’s Alsace region. Not only do they have beautiful buildings and uber picturesque scenery (sure to have you singing tunes from Beauty and the Beast), but they also make killer wine.

16. Bryce Canyon, Utah (Big Thunder Mountain Railroad, Disneyland): The wildest ride in the wilderness is beautifully modeled after the American Southwest. One of the big inspos is Utah’s majestic Bryce Canyon.

17. Monument Valley, Arizona (Big Thunder Mountain Railroad, Disney World): While the Imagineers replicated Bryce Canyon for Disneyland, they went to a different — yet equally stunning — locale for the version in Disney World. This time they pulled in landmarks from Monument Valley to create the sun-kissed rock formations.

18. Mustang, Nepal (Expedition Everest, Disney’s Animal Kingdom): “It’s a very convincing look at a Himalayan environment,” said Joe Rohde, one of the main Imagineers behind Expedition Everest and the area surrounding the thrill ride. Rohde and his team traveled to Nepal to harness the look and feeling of the land and found inspiration in a 1,000-year-old monastery near Mustang, Nepal.

19. Cadillac Ranch, Texas (Radiator Springs Racers, Disney California Adventure): The Imagineers responsible for Cars Land spent significant time on Route 66 and other notable highways to correctly capture the vibe from Pixar’s Cars. One of the places that has a (literally) huge influence on Radiator Springs Racers is the Cadillac Ranch, located west of Amarillo, Texas, off of Route 40. (Photo via Richie Diesterheft/Flickr/Creative Commons)

21. African Safari (Kilimanjaro Safaris, Disney’s Animal Kingdom): Going on an actual safari in Africa is a big bucket-list item for many of us. Thankfully, we can get the next best thing at Disney’s Animal Kingdom. From the jeeps to the animals to the Florida heat, they really capture the safari experience to tide us over until we can splurge on a trip to a country like Kenya, South Africa, or Namibia for the real thing.

23. Bergen, Norway (Frozen Ever After, Epcot): When creating the icy world of Arendelle in a little movie you may have heard of, the filmmakers spent quality time in the storybook-worthy town of Bergen. Their work trip (and the film) served as inspo for the popular Elsa and Anna ride in Epcot’s Norway pavilion.

Have you ever scoped a ride’s real-life inspo? Tell us about it @BritandCo!