“Dynasty” Recap: Cristal’s Mysterious Past Comes Back to Haunt Her 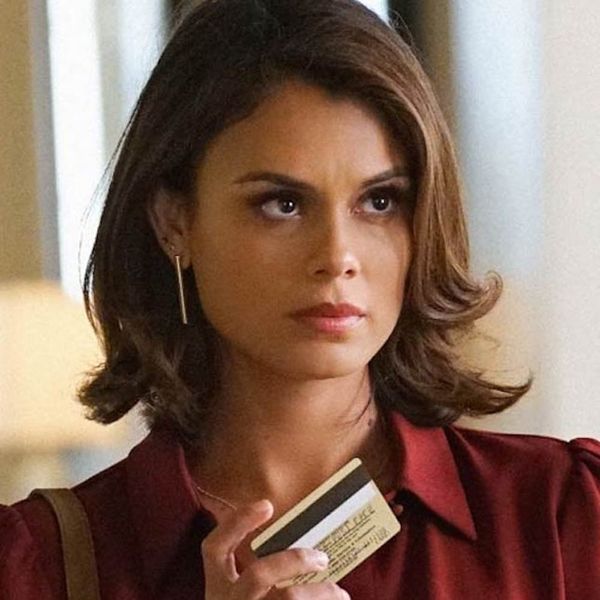 The latest Dynasty episode, titled “Guilt Is for Insecure People,” pits both Fallon and Steven against their father, Blake, though on two very different fronts, while a few more puzzle pieces fall into place regarding Cristal’s mysterious Venezuelan past.

On the personal side of things, Steven is out on bail, but he’s still being charged in Matthew’s death. Apparently, some eco-terrorist group called The Last Earth Coalition is claiming responsibility and Steven has given millions of dollars to them; plus, the authorities say he had the means and the motive, so that doesn’t look great for him. Steven’s big issue is that he doesn’t have an alibi for the time of Matthew’s death. He asks Sam to come forward as his alibi, but Sam says he has a record and no jury would believe him.

The problem with that is that this case isn’t anywhere near the trial phase; Sam could come forward and provide Steven’s alibi and it’s likely the police would drop the charges. So, that’s a pretty weak excuse for Sam not wanting to stick his neck out for his new hookup buddy.

But anyway, without an alibi, Steven isn’t sure what to do. Michael the chauffeur takes pity on him and gives Steven some dirt on Blake — it turns out Papa Carrington had the chief of police snake Matthew’s cell phone and slip it to Blake, because obviously, something incriminating is on the phone. Steven confronts his dad about the phone, but Blake denies everything.

Meanwhile, on the business side of things, Blake is making it tough for Fallon and Jeff Kolby to get Carrington Windbrier up and running because the Carrington name is trademarked. So Fallon and Jeff go on the offensive, trying to find Matthew’s phone to use it against Blake.

Unfortunately for Fallon, no one can locate the phone. But Michael gives her a little pick-me-up in the form of a pep talk about how brilliant she is and how she’ll figure out a way to beat her father without having to blackmail him.

Away from the Carrington family drama is drama for another family. Sam’s mom (Cristal’s sister) calls to tell Sam that her place in Caracas was robbed and she needs money. When Cristal tries to send her sister $10,000, her card is declined because good ol’ Anders has now merged Cristal and Blake’s accounts, as per the prenuptial agreement. Cristal is worried about a $10,000 transaction, but Blake gives her the greenlight to buy anything from “boats to boots,” so she really should be okay, as long as she can hide that the transaction would be coming from a Venezuelan food truck — because who the hell spends $10K at a food truck, right?

But instead of figuring out a way to just put the $10K on the black AMEX, Cristal and Sam scheme to steal a ridiculously expensive necklace from the annual Carrington charity gala. Cristal is modeling the necklace the evening before it is auctioned off, giving her and Sam the perfect opportunity to steal it.

The gala is the big backdrop for all of this drama, which is perfect, because it has an ’80s theme this year. It lets Fallon and Cristal strut their stuff in some gowns that would make Linda Evans and Joan Collins beam with pride.

During the auction, Jeff and Blake get into a bidding war for the necklace, which leads to a fight that culminates in the giant ice sculpture being knocked over, but unfortunately does not involve the two of them rolling around on the floor in shrimp cocktail. Now that would have been a Dynasty fight.

In the end, Cristal can’t go through with stealing the necklace, so she hands it over to Jeff with a wistful look in her eyes (probably over how much that kind of money would change her sister’s life). So Sam takes it upon himself to fix things and robs Blake’s bedroom, stealing Cristal’s engagement ring, a pair of emerald cufflinks, some watches… and Matthew’s phone.

Blake had the phone all along, because something hugely incriminating is on there — and I don’t think it’s something about Cristal’s affair with Matthew. I think it’s something worse. But Blake lies to Steven (again) after Steven saves him from the burglar. This time Blake comes clean about having the phone, but he says he gave it back to the police. Except he didn’t, and now Sam and his fence have the phone. Hmm.

And finally, the show peppers in a few flashbacks of Cristal’s life in Venezuela. We don’t yet know who she stole a bunch of cash from, but we do know she used it to flee the country (leaving her sister and young Sam behind).