Will.i.am Created a 3D Printer That Lets You Print With Recycled Bottles 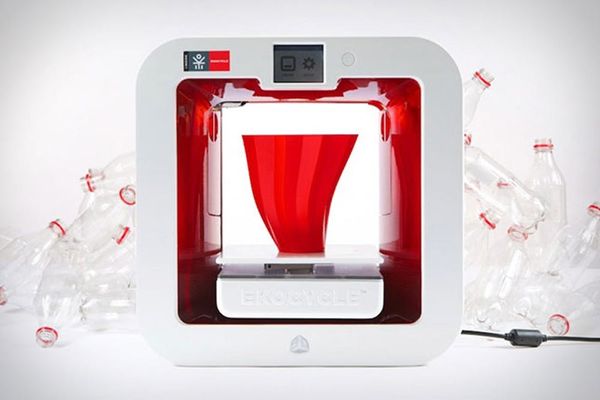 Our future homes are about to get a lot greener, guys: Now 3D printers are the new recycling bins. And so the eco-friendly adage of old will soon become Reduce, Reuse, Ekocycle. Brand-new Ekocycle Cube, the latest gadget from 3D Systems, prints filament made partially from recycled plastic, turning hundreds of millions of tons of waste into your tools, tabletop totems and next-big things that make us go “WOW.”

Brought to a desktop near you by 3D System’s Chief Creative Officer/Black Eyed Peas frontman will.i.am and co-collaborator Coca-Cola, the Ekocycle Cube was created to make 3D printing even more sustainable. Standard PLA filament, the material used to print objects by systems like MakerBot, MOD-t and 3D System’s own Cube, is already pretty darn eco-friendly — it’s made from low-cost natural resources and fully biodegradable. But the Ekocycle’s filament, which contains 25% post-consumer PET recycled material, makes what’s headed for the bin totally useable again. As will.i.am lyrically puts it, “Waste is only waste if we waste it,” and that’s something the future of 3D printing seems to make sure we won’t do.

Each Ekocycle cartridge yields about three plastic bottles-worth of durable material, which can print any design straight from Cubify’s web or mobile platforms as well as the 25 free fashion, music and Fergalicious accessories curated especially for the Ekocycle by will.i.am himself. Designed with flashy red panels and touchscreen controls in the same, sleek shape as its Cube predecessor, the plug-and-print gadget can print in dual color from a slick palette of red, black, white and “natural.” Maybe all the added flair will create more wide-spread fanfare over the release of this 3D printer than over the equally awesome ones that have dropped the past, and 3D printers on the Xmas lists of the masses is something we can totally get behind. But even if the outcry is something like “Let’s get it started” from interested upcyclers and budding innovators, they may have a hard time cheering on the $1,199 price tag (yes, a sum to scoff at now). Still, the concept of carving out a super sustainable place in the maker space is totally worthy of a standing O.

Would you splurge on the Ekocycle? Or do you have your eye on another lean, mean 3D printing machine? Tell us in the comments below.