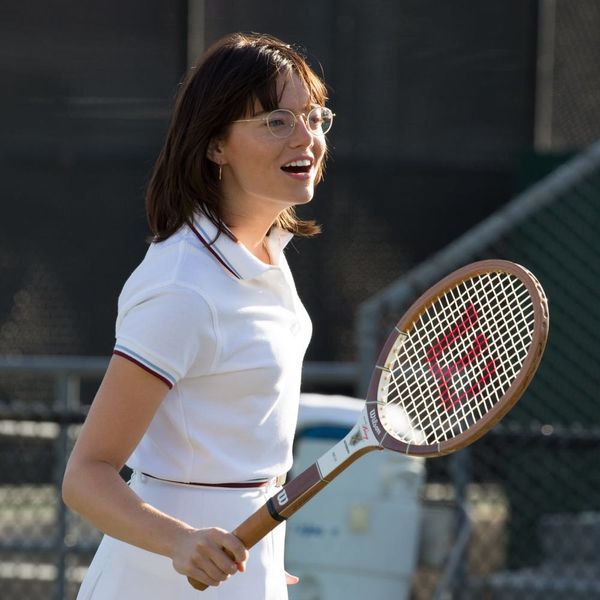 In her new movie, Battle of the Sexes (out today), Emma Stone plays tennis star Billie Jean King, who, in 1973, played a match against fellow pro Bobby Riggs after he bragged that he could beat any female player. She dominated, winning in three sets and thus changing the face of women’s tennis forever.

At a press conference one day after the film’s September 16 LA premiere, sponsored by Citizen Watch (which partnered with King and the Billie Jean King Leadership Initiative to become advocates for equality), Stone and her costars, including Steve Carell, who plays Riggs, talked about the historic match and how they prepared for their roles. Stone shared that getting ready for the movie made her feel empowered — and not just because of the story.

When asked if her tennis training had an impact on her performance, Stone said it had an impact on her life. “I’ve never played an athlete before and I had never been athletic before, really,” she told reporters, including Brit + Co, at the press conference. “I had danced, obviously and things like that — that’s athletic but kind of [in] a different way than a weightlifting tennis player — and so the beginning of the process was pretty brutal. But then you get into a place that was so amazing and you start to understand the mind of someone who is strong enough to execute whatever it is they want to execute.”

As Stone continued to work out, building muscle, she realized that she could use her body to do the things she wanted to do, like lift heavy things or smash a ball across the tennis court. “My dogs have food — like a 60-pound food bag — and I was like, ‘I got it!'” she recalled. “It was like the most empowering feeling in the world and I can’t believe I just did this! It was the best.”

Once she understood how strong her body could be, Stone started connecting the dots between physical and emotional strength, something she’d never considered before. The 28-year-old actress realized that King’s strength as a tennis player fed her strength as an activist, both for women’s rights and queer rights.

“I thought, you know, Billie Jean is a social activist, she was always wired for social change, she knew that from a young age,” Stone explained. “What she was talking about, you know — everyone was white, the gloves were white, the balls were white, everything, and she realized that at the very beginning — but she also realized she was great at tennis and this was going to be an amazing platform for her, if she could be the best, to change the world. So physicality has everything to do with that. If you have the strength to be the best in tennis, you can change the world.”

Getting into that mindset shaped her portrayal of King in a big way. “That was an amazing place to get to, to understand that physical strength equals strength out in, you know, our country or the conversation or to further equality. And I know that sounds a little bit… I don’t even know what… it sounds a little crazy for me to say that, but I did start to put those pieces together and it was super empowering. It felt so good.”

How do you feel empowered? Tell us @BritandCo!