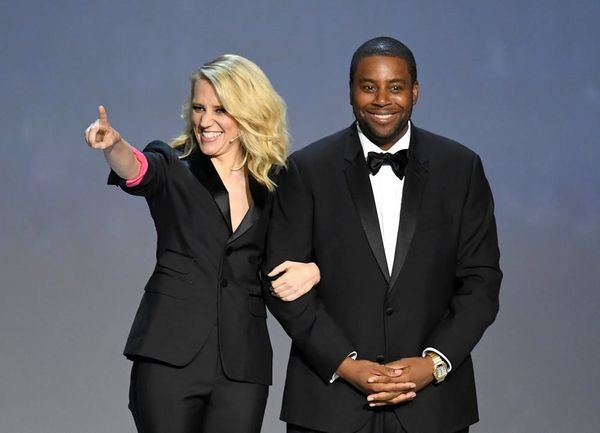 The 2018 Emmys opened with Saturday Night Live cast members Kate McKinnon and Kenan Thompson not only celebrating the show’s 70th anniversary, but also declaring once and for all that Hollywood’s diversity problem is solved.

“We’re celebrating the fact that this year’s Emmy Awards has the most diverse group of nominees in Emmy history,” Thompson proudly declared. “I’m gonna go ahead and say it — we solved it!”

“Wait, seriously? So, diversity is not a problem in Hollywood anymore?” McKinnon asked excitedly.

“Nope, we solved it,” Thompson replied.

At that, the pair broke into song. “We solved it,” they crooned. “We’ve gotten with the times / There’s room for all our voices, but mostly Shonda Rhimes.”

The went on to acknowledge Fresh Off the Boat and Killing Eve star Sandra Oh, the first-ever woman of Asian descent to be nominated for lead actress at the awards show: “You’re welcome, Asian people, we gave you that one show / And who can forget the amazing Sandra Oh!”

As the song continued, Unbreakable Kimmy Schmidt star Tituss Burgess, The Good Place’s Kristen Bell, and Sterling K. Brown joined the pair to champion a job well done. Then Ricky Martin took the stage to infuse some Latin beats into the tune — only to be interrupted by self-proclaimed “straight white guy” Andy Samberg.

“You can’t be a part of this,” McKinnon told him before introducing the “One of Each” dancers, a racially diverse group of performers who “check every box.” Finally, drag legend RuPaul arrived with a telephone call for Thompson, who found out from the person on the other end that the diversity problem is not, in fact, solved, and that there’s actually “a long way to go.”

Did you like the Emmys opening number? Let us know @BritandCo!

Kat Armstrong
Kat has been a writer, social media maven and mom for longer than she's willing to admit. She's also spent time in front of and behind the camera, interviewing celebs, politicians and acting as a producer for fashion and artistic photography shoots. When she isn't writing for various orgs and publications, she's hanging with her kids, husband and French Bulldog, Peter, in Toronto, Canada.
Awards Shows
TV
Awards Shows Emmys
More From TV