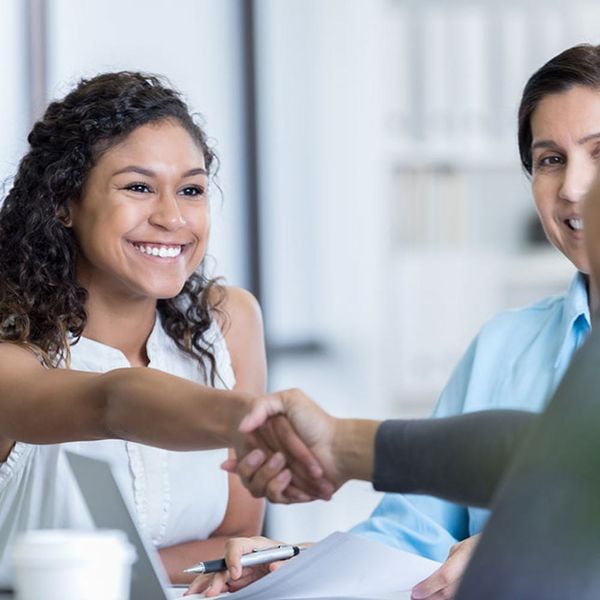 You’ve swapped your dorm room for a studio apartment, and instead of cramming for exams you’re sending out resumes. For many of us, searching for our first job as a new grad is one of the most humbling experiences of our lives — you’re riding high from completing a major milestone and instead of hearing dollar signs, it’s crickets.

But don’t despair! It may take a minute, but your hard work will pay off (even if you have to accept a job you don’t really want at first). And while navigating the job market solo is totally doable, it’s always nice to have help — especially if it comes from Lea Berman and Jeremy Bernard, co-authors of Treating People Well: The Extraordinary Power of Civility at Work and in Life ($27). These two former White House social secretaries (Berman and Bernard worked for the Bush and Obama administrations, respectively) know a thing or two about making good impressions (and even better connections!). We chatted with them to get their insider perspective on the easiest way to get your foot in the door, what to do about your Instagram account, and when it’s appropriate to leave work in the evening.

ASSIST YOUR BUTT OFF

And no, we don’t mean sacrificing yourself to a horrible boss à la Andy Sachs in The Devil Wears Prada. But Berman and Bernard believe that taking a job as someone’s assistant is the best way to learn if you’re not sure what you want to do. Bernard says, “You’re making connections, learning basic office skills that will always be useful, and gaining a level of discipline that you will need to learn no matter what you decide to do. It will teach you how to be professional and what the expectations of a business setting are.” Often, it means you have a direct, intimate connection with the most powerful people in the company — not too shabby for an entry-level position.

MAKE YOUR Social Media Skills WORK FOR YOU

Berman and Bernard agree that social media is both this generation’s blessing and curse. They’re adamant that you should always keep your social media private, no matter how many followers you have. Bernard says that more than one qualified intern candidate lost their opportunity with the Obama administration because of things they’d posted on social media.

With that said, Berman does offer that “the social media and computer skills that young people bring to a job can make them invaluable members of the team in a very short time. Older people (like me) have difficulty keeping up with technology changes — I use social media every day — but I’m always playing catch up. Offering to help with software glitches or posting to social media on different platforms will make any new hire very popular. It’s easy to shine if you’re willing to be a tech sherpa, and your good attitude will be noticed.”

It’s all who you know. Well, kinda

Sure, it helps to have connections when you’re looking for a job. But Berman reminds us that receiving that coveted offer letter isn’t as simple as grabbing coffee to pick someone’s brain. “Treat every connection like a possibility rather than a foregone conclusion that they will give you a job. It’s just a foot in the door, and however good your connection, you’ll still have to prove you’re the person for the job,” she says. “[And] when you’re trying to enter a profession where connections are essential (like writing, sales, or advocacy), don’t ask anyone to give you their own hard-won contacts they’ve made while building their careers.”

If you’re interested in working for a particular company but they don’t have any openings that fit your skill set or are at your level, “consider other positions that will get you in the door,” Berman says. She and Bernard agree that you have to remember that nothing is beneath you — most people have to start at the bottom. No matter what, you’ll learn something, even if it’s just how to work in an office environment and get along well with others.

Networking can be nerve-racking, so Berman suggests this simple game plan: “When you walk into a room and you don’t know anybody, look for a group of people who are chatting comfortably. Avoid a group that appears to be in an intense conversation. Smile, make eye contact and introduce yourself. Say something general about the occasion that you’re all at [like], ‘Wasn’t that a funny speech?'” she advises. “After you’ve been chatting for a bit, if it seems as though there’s not much left to say, it’s perfectly fine to excuse yourself and find another group of people to talk to. Just say, ‘It’s been so nice meeting you. I hope we see each other again some time,’ and move on. You’ll become more and more comfortable with each introduction.”

Humility will serve you well, especially when you’re just starting off, and Bernard points out two areas where this is important. “Be flexible about what you think you should earn. You have no salary history, remember? There may be hidden opportunity for growth and promotion in an entry-level job,” he says. “And one last thing — don’t leave work until after your boss leaves, especially the first few months. Unless they tell you to go home.” It’s all about putting in that extra effort and showing you’re committed!

Are you a recent graduate who just scored an awesome job? Tweet us @BritandCo and tell us how you nailed it!