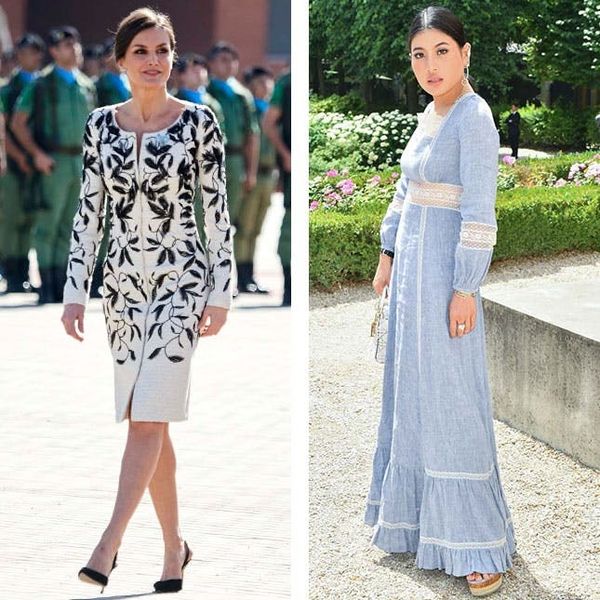 We know you (like us) would love to have Kate Middleton's and Meghan Markle’s wardrobes, but they aren’t the only royals catching our sartorial attention. There’s actually a slew of other queens, princesses, and duchesses that could, dare we say, give Middleton and Markle a run for their money in the fashion department. These prestigious ladies offer new takes on polished royal style and are all filled with unique outfit inspiration. Here, we take a glimpse into all the noble names worth putting on your radar.
Queen Letizia of Spain: A former journalist and news anchor, Letizia Ortiz Rocasolano has always been a fashion force, but especially after marrying Felipe VI of Spain in 2004. While she wears breathtaking designer gowns often, she’s also known for stepping out in affordable must-haves from brands like Zara. There’s just nothing better than approachable royal style, right? (Photo via Carlos Alvarez/Getty)
Princess Sirivannavari Nariratana of Thailand: Sure, she’s a fixture on the fashion week circuit, often showing off her intricate, high-end style while front row at the couture shows (like this look from Christian Dior). But this princess is also a well-accomplished athlete as a former badminton player. (Photo via Corbis/Getty)
Princess Charlene of Monaco: We’ve been laser-focused on this former Olympic swimmer’s elegant yet cool vibe (ahem, this Versace jumpsuit, anyone?) ever since she wed Prince Albert II in 2011. (Photo via Stephane Cardinale/Getty)
Princess Keisha Omilana of Nigeria: Before tying the knot to Prince Kunle Omilana, this princess, who is known for her eye-catching yet wearable style, earned a degree in fashion and worked as a model. Fun fact: Omilana even became the first black woman to be featured in three consecutive Pantene commercials. (Photo via Mike Coppola/Getty)
Princess Deena Aljuhani Abdulaziz of Saudi Arabia: The California-born former editor-in-chief of Vogue Arabia is a street style star during fashion month thanks to her cutting-edge looks and adoration for designer labels, and has been since she wed HRH Prince Sultan bin Fahad bin Nasser bin Abdulaziz back in 1998. (Photo via Mireya Acierto/Getty)
Queen Rania of Jordan: She became princess consort back in 1993 after marrying Prince Abdullah II of Jordan, but became Queen of Jordan in 1999 when her husband ascended the throne. While she’s a pro at crafting sophisticated outfits that we can't help but want to re-create, she’s also noted for her outstanding philanthropic work. (Photo via Eamonn M. McCormack/Getty)
Princess Talita von Fürstenberg of Germany: As the granddaughter of Diane von Fürstenberg and Prince Egon von Fürstenberg of Germany, this one-to-watch literally has style in her blood. So it’s no surprise that she has a popular Instagram account filled with playful and youthful fashion inspiration and more of her jet-setting life. (Photo via Venturelli/Getty)
Princess Sofia of Sweden: Marrying into the Swedish royal family in 2015 to Prince Carl Philip, Duke of Värmland, the former model and reality TV star (she appeared on Paradise Hotel) is worth tracking for her enviable gowns and everyday ensembles that are simple yet impactful. (Photo via Samir Hussein/Getty)
Baroness Caroline Flemming of Denmark: Born into the Danish royalty in Valdemar’s Castle, she is a multifaceted style maven famous for her over-the-top and festive looks, her own perfume series, Eau de Vie, a range of Danish cookbooks, and several TV and modeling credits. (Photo via Ki Price/Getty)

Bobby Schuessler
Bobby Schuessler is a contributing fashion writer at Brit + Co and has contributed to Who What Wear, Refinery29, Lucky, Glamour, Out, Nordstrom, and Barneys New York. When he's not writing about style and shopping, you can find him catching up on the latest Housewives franchise and sipping his go-to drink, a vodka martini with a splash of cranberry and a twist.
Royal Style
Celeb Style
Royal Style
More From Celeb Style

8 Ways to Wear a Power Suit This Spring, According to Celebs