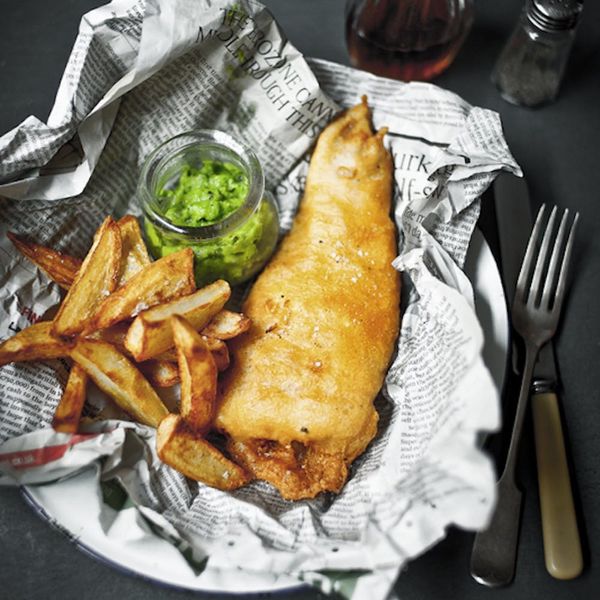 You want more seafood in your weekly meals, but outside of fish tacos and grilled salmon, you’re at a loss for what to prepare. Take a note from the Brits and try fish and chips, whether it’s beer-battered, tossed in breadcrumbs, baked, or fried. Scroll down to find 17 fish and chips dinner recipes that’ll bring the pub right to your kitchen.

If you like to experiment with flavors, this Caribbean take on fish and chips might entice you. (via The Cook Report)

Ah, the classic. You can’t go wrong with soft, beer-battered cod with thick cut fries. Mash up the traditional side of minted peas, and you might as well be in a British pub. (via Baba Ganuj)

Obviously, chips to Americans mean thin slices of deep fried potato, which is what’s served with this baked fish. (via Martha Stewart)

TBH, sweet potato fries may take over as the best fry out there. In this case, their sweetness pairs perfectly with the almond crusted fish. (via Princess Misia)

No deep fryer? No problem! Bake both your fish and your chips on the same sheet pan, and dinner will be ready before you know it. (via Simply Recipes)

Combining fish tacos and fish and chips into one dish is so genius, we wish we’d thought of it. Be sure to mix up a homespun spicy tartar sauce to dress your creation. (via Cooking and Beer)

Fast food fish sandwiches have nothing on this burger. Give matchstick cut potatoes a quick fry to go alongside, and you can say sayonara to the drive-thru. (via Nicky’s Kitchen Sanctuary)

The secret to this perfectly crunchy baked fish is none other than puffed rice cereal. When it comes out of the oven, finish with salt and pepper and a generous dose of malt vinegar. (via Food Network)

Similar to Southern-style cornmeal-crusted fish, this polenta version is as crisp as it is tender. It’s just begging to be slathered in tartar sauce, and you should oblige. (via My Kitchen Kohl)

Add an Asian flair to standard fish and chips with a side of spicy kimchi tartar sauce. If you decide to forgo fries or chips, fry up a few perilla leaves instead. (via Suzanne Spiegoski)

This herbaceous pan-fried fish is perfect for entertaining a crowd. (via Taste and Tell)

Fish and chips don’t have to be two separate dishes. Encrust your fish with salt and vinegar chips and you’ll kill two birds with one stone. (via A Spicy Perspective)

Pour yourself a pint of Guinness and prepare to do our Irish friends proud. Just make sure you leave enough beer to soak the chips in. (via Half Baked Harvest)

When you really want to add a burst of nutrition to your fish, coat the outside in quinoa. The result is an ultra-crunchy exterior which allows the inside to remain juicy and flavorful. (via Donna Hay)

The famous fish, chips, and mashed pea trio is a decidedly heavy dish. This lightened-up version uses minimal oil to prepare, making it a great option for those watching their intake. (via The Growing Foodie)

Pop a fried fish nugget on top of a blue corn tortilla chip and you’ll have a fun appetizer version. Don’t forget to garnish with tartar sauce and fresh dill! (via Sugar and Charm)

To add the fishy flavor to your tofu, puree it with kelp or seaweed and form into filet-like planks before frying. (via Nutmeg and Chives)
Paige Johnson
Paige is a blogger, food writer and culinary master from Louisville, Ky. She's a newlywed who's obsessed with dogs and renovating her 117 year old home. When she's not working on her blog — My Modern Cookery — you can find her binge watching F.R.I.E.N.D.S with a triple shot latte in-hand.
Comfort Food Recipes
Recipes
Comfort Food Recipes Dinner Recipes Fish recipe roundup
The Conversation