Do You Know the Caffeine Content of Your Favorite Morning Beverages? 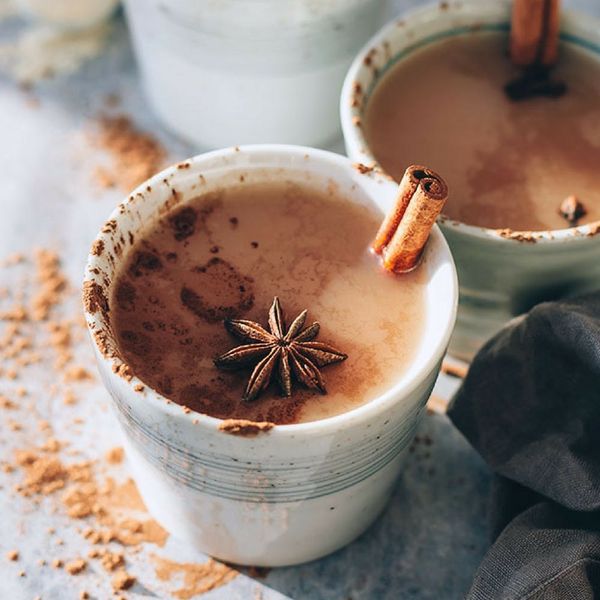 Coffee magically makes its way into our morning beverages, cocktails, and desserts, so that there's never a moment we're not sufficiently caffeinated. Tea too, when properly brewed, can be a delight to sip on throughout the day. In fact, most of us are indulging daily in a little extra boost of liquid energy — the results of a survey, conducted by the National Coffee Association, showed that about 54 percent of Americans over the age of 18 drink coffee. So it’s time we face the facts and learn how much caffeine is actually going into our bodies. After all, too much of a good thing can be bad. Please note: Caffeine content is subject to change based on brewing methods and beverage size. Information of base caffeine content for beverages comes from Caffeine Informer.
Green Tea: An eight-ounce cup of green tea is a mild stimulant compared to almost any other choice except decaf. One cup has about 25 milligrams of caffeine, making it an ideal option to sip on all day long. (via Oh, How Civilized)
Black Tea: Black tea's caffeine content can range anywhere between 25-48 milligrams depending on how long you let the tea steep in an eight-ounce cup. Even if you like your tea dark and bitter, don't worry — you're going to have to drink quite a bit before you reach the recommended daily limit of 400 milligrams. (via Oh, How Civilized)
London Fog: A London Fog is a classic tea latte that feels like a traditional latte, but will only give you the same amount of caffeine as an eight-ounce cup of black tea (25-48 milligrams). You will, however, have a creamy, honey-tinged drink to enjoy. (via The Healthy Maven)
Espresso: Some real, hard-core coffee lovers take their espresso straight. No milk, no foam, no sugar. Those who choose to ingest their caffeine in this form are clearly pragmatic: You can just toss it back and be done with it. Although, it's also very common in Europe (especially Italy) to sit back and sip your espresso leisurely. However you take it, one shot has about 40 milligrams of caffeine. (via Backbube)
Café Con Leche: Call it café con leche or café au lait, this beverage literally translates to coffee with milk. It's a creamy drink made with half drip coffee and half milk which makes it surprisingly easy to drink. Also, because it's only half coffee, a 12-ounce cup contains a mere 60 milligrams of caffeine. (via Offbeat + Inspired)
Chai Latte: A chai latte can vary greatly in caffeine content based on how it's made. At a coffee shop, a 12-ounce chai tea latte has approximately 70 milligrams of caffeine. Pre-made chai latte mix has 30-35 milligrams of caffeine in a one-cup serving. Simple brewed chai is just black tea, so it will have between 25-48 milligrams of caffeine in each cup. (via The Awesome Green)
Matcha Latte: Matcha is a traditional Japanese green tea that's made from powdered tea leaves and has a surprisingly potent punch of caffeine. Two grams of matcha in eight ounces of water will give you 70 milligrams of clean, clear caffeine. If you blend it into milk, which many people love to do, you're not going to get any more energy, just a larger drink. (via A Cozy Kitchen)
French Press Coffee: If you're looking for caffeine in your drinks and aren't concerned with fancy names or elaborate preparation, French press coffee is the way to go. A 12-ounce cup has about 107 milligrams of caffeine. Plus it's a lot cheaper than espresso drinks. (via Brewing Happiness)
Macchiato: A macchiato is basically a shot of espresso with a dollop of milk foam on top. Of course, you can add other flavorings like caramel, but it won't up your caffeine content, which is 40 milligrams if you use one shot of espresso and 80 if you prefer two. (via Cooktoria)
Dirty Chai Latte: A dirty chai latte has the benefit of receiving caffeine from both tea leaves and coffee beans, making it a double whammy. So if you're trying to avoid the taste of coffee but need that extra 40 milligrams of caffeine from an espresso shot, this drink is your answer. A 12-ounce latte will deliver about 110 milligrams of caffeine total. (via The Blondilocks)
Mocha: Mochas have a surprisingly high caffeine content due to their indulgent mix of chocolate and coffee. Although we all think chocolate is merely a sweet, it's actually a sneaky substance packed with caffeine. So be wary when you order a mocha — you'll get a whopping 152 milligrams of caffeine in a 12-ounce cup. (via Posh Journal)
Energy Drinks: If you're knocking back energy drinks, you're in some serious need of sleep. Or maybe you just love the instant jolt of energy that they give you. Either way, these artificial sources of caffeine are your best bet to perk you up quick. Red Bulls are the least extreme, clocking 80 milligrams of caffeine for an 8.4-ounce can. Monster's 16-ounce can brings you 160 milligrams. 5-Hour energy, on the other hand, packs 200 milligrams of caffeine into its two-ounce bottle. (via Wine Dharma)

What else do you drink in the morning? Tag us in a photo of your favorite pick-me-ups @BritandCo.