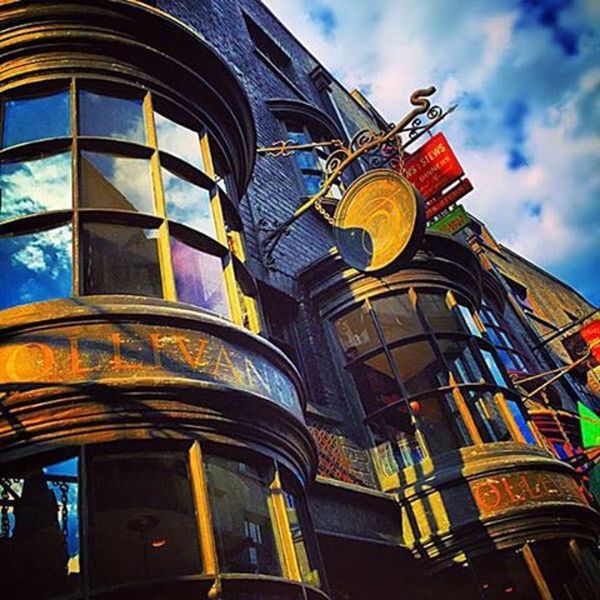 Picture your ideal classy night out: Maybe it’s a nice dinner at that swanky place you’ve been wanting to try or maybe it’s tickets to a show. But, let’s be real. Sometimes all you really want to do is have some fun. The kind of fun you had when you were a kid. Remember? Roller coaster rides. Carnivals. Slides. Here’s a list of ten amazing travel spots to hit up when you want to channel your inner child.

1. Retro Row, Los Angeles, CA: Feeling like your not-so-typical shopping spree? Head over to the quirky 4th Street strip known as Retro Row in Long Beach’s shopping district. The area is known for its vintage clothing and furnishings, and recently has seen a bit of a revival of sorts. It’s expanded a few blocks to include restaurants and wine bars with trendy craft beers and curated wine lists. And it’s the place to be at night, where you can often hear live music. (Photo via @retrorowlb)

2. Wizarding World of Harry Potter, Diagon Alley and Hogsmeade, Orlando, FL: Ah, Harry Potter. If you’re in your 20s, it’s likely you were one of those kids staying up late at your local bookstore, eagerly anticipating the release of the next book. And you probably went to the premiere of all of the movies and basically wish you could have actually gone to Hogwarts. If Harry Potter brings out the kid in you, then visiting the whimsical Wizarding World of Harry Potter in Universal Studios and Islands of Adventure Orlando is an absolute must. (Photo via @universalorlando)

3. Wrigley Field, Chicago, IL: Take me out to the ball game! Take me out to the crowd! There’s something classic about going to watch a baseball game. Sitting in the stands with friends. Eating a hot dog. Enjoying the day. And there’s something special about enjoying this all-American pastime in the beautiful and historic “Friendly Confines” of Wrigley Field in Chicago. Go ahead: Sit back, relax and shout “Let’s play ball!” (Photo via @cubs)

4. Coney Island, Brooklyn, NY: Coney Island was the birthplace of the roller coaster and modern amusement park. Go for Nathan’s Famous hot dogs and stay for the nostalgia of it all. This kitschy carnivalesque conglomeration of concessions will have you feeling like a little kid again. People-watch along the boardwalk, ride the Wonder Wheel for a nice panorama and hop on the famous Cyclone, which is also a National Historic Landmark. End your fabulously playful day with a fireworks show (every Friday between June and September). (Photo via @coneyislandisfun)

5. Mardi Gras, New Orleans, LA: If you’re not feeling playful before a Mardi Gras parade in New Orleans, chances are you’ll be feeling pretty playful once you’ve caught a moon pie or two. There’s nothing quite like it. Decked out in purple, green and gold, everyone spills out onto the sidewalks to get in on the action, and there is literally dancing in the streets. (Photo via @nolamardigras)

6. Lego Headquarters, Billund, Denmark: You probably have some memory of playing with Legos in your childhood. Well, forget Legoland (although, that’s fun too)! The Lego Headquarters in Denmark is where it’s at. (No, really. That’s where they’re headquartered). And, yes, everything is awesome there. (I mean, see the photo above). Get a tour of the original Lego Land by registering for the 2015 Inside Tour Dates. The cost is $2500 per person, but this includes meals and a stay in Hotel Legoland from Wednesday through Friday along with some other rather VIP treatment. Awesome, indeed. (Photo via @lego)

7. Beach Park, Fortaleza, Brazil: Brazil’s largest water park, Beach Park is also located on a beautiful stretch of strand. There’s something to do for every age and thrill-tolerance. For the daredevils out there, there’s the “Insano.” Climb 14 stories and take in the view before plunging down the world’s second tallest water slide. Rinse and repeat. (Photo via @beachpark)

8. Park Guell, Barcelona, Spain: If ever a park was whimsical, it’s this one. This playful park was designed by renowned Spanish architect Antonio Gaudí. Meander around this slightly surreal landscape, where you’ll come across mosaic dragon-lizards and a “forest” of leaning tree-like stone columns. It’s a perfect place to let your imagination run wild. You’ll think you fell down the rabbit hole and ended up in Wonderland. (Photo via @park_guell)

9. Disneyland, Paris, France: Okay, so let’s assume you’ve had ample time to wine, dine and view art in Paris. It’s the City of Love, but you also love Disneyland because — let’s face it — it really is the happiest place on earth. For those of you who simply can’t get enough Disney in your life, there’s Disneyland. In Paris. Pose in front of Sleeping Beauty’s beautiful Castle (complete with a dragon underneath), and hop on a ratmobile for the Ratatouille ride before ending your magical day with dinner at Chez Rémy. (Photo via @disneylandparis)

10. Angry Birds Land, Tampere, Finland: Yes, it exists. The colorful land is located within the Särkänniemi Adventure Park and contains an adventure course, rides and gaming and treat shops. It’s delightfully playful (if slightly random) in the best possible way. Go get those piggies! (Photo via @sarkanniemitampere)

What are some whimsical places on your bucket list?

Anna Medina
Anna Medina is an event coordinator and freelance writer living in the Bay Area, CA. She appreciates all forms of artistic expression and creativity and firmly believes that everyone has an inner artist just waiting to break free. She studied English with Creative Writing and Iberian and Latin American Cultures at Stanford, where she would have preferred to spend all her time there waltzing.
Disney
Lifestyle
Disney Harry Potter Lego Mardi Gras Music Retro Road Trip Vintage
More From Lifestyle