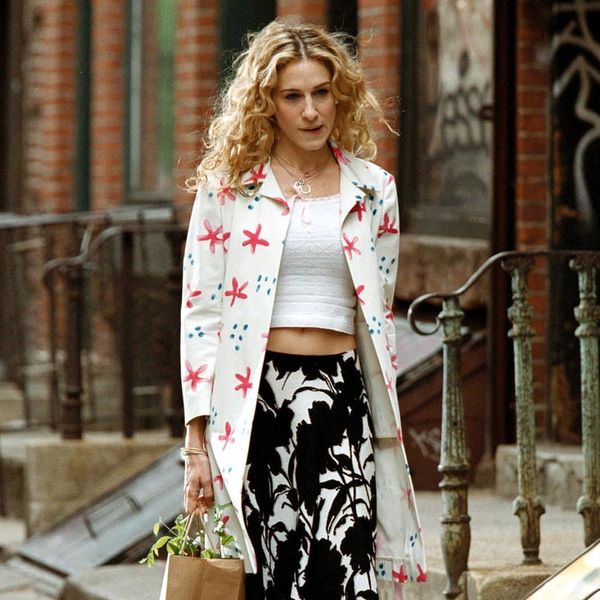 When it comes to style trends, it’s not a secret that the ’90s are back in a big way. But one celebrity jeweler explains why we’re all about to take a page directly out of Carrie Bradshaw’s jewelry book. Her beloved nameplate necklace is making a comeback, and it has already been given a 2018 twist thanks to cool girls like Gigi Hadid, Khloé Kardashian, Kendall Jenner, and even Beyoncé.

George ‘the Jeweler’ Khalife told Us Weekly that so many of his A-list clients are coveting personalized jewelry these days, explaining that “Gigi and Khloe both love my gold chokers and Virgin Mary medals,” he says, adding, “Both of them are such iconic women and I think all women love to have something that no other woman has. The thing I love most about this trend is that I’m able to create something unique for each person.”

And while Hadid has been known to sport a Zayn necklace in honor of her on-again, off-again beau, she’s also worn a matching nameplate necklace with her bestie Jenner. Kardashian has rocked several variations of the nameplate necklace, wearing a Koko necklace honoring her nickname, as well as a Tristan necklace for boyfriend Tristan Thompson and a True necklace for her daughter.

Kardashian also famously wore her Koko necklace in her driver’s license pic, because what better way to pose for an ID photo?

Of course, the nameplate necklace is not a new trend, as nameplate necklaces were made popular by women of color in the ’80s and brought to mainstream pop culture first on MTV and then by Carrie Bradshaw in the late ’90s. Sex and the City fans will no doubt remember the horrifying moment in the series finale when Bradshaw lost her iconic necklace, devastated because, “It costs, like, nothing, but it’s priceless.”

Costume designer Patricia Field revealed that she had no idea how iconic Carrie’s gold necklace would become, telling InStyle in 2015, “I have a shop in New York City, and a lot of the kids in the neighborhood wore them. I thought, ‘Maybe I’ll show it to Sarah Jessica and she’ll like the idea.’ She did, and she made it happen. It became a universal, long-lasting thing,” adding, “I think there’s a trend now toward smaller pieces, and the name necklace fits within that genre. Names are timeless. Every woman has one: young, old, short, or tall.”

Some things just never go out of style.

Would you rock a nameplate necklace in 2018? Sound off over @BritandCo.

Arielle Tschinkel
Arielle Tschinkel is a pop culture junkie who went to NYU because the Olsen twins went to NYU (really). She is a freelance writer whose work has also been featured on HelloGiggles, Refinery29, SheKnows, Bustle, Hollywood.com, and many others; and she's living her dream one Britney Spears GIF at a time. Follow her on Twitter @mrstschinkel or visit her website at arielletschinkel.com.
Trends and Inspo