Carrie Bradshaw’s Most Iconic ‘Sex and the City’ Looks, Ranked 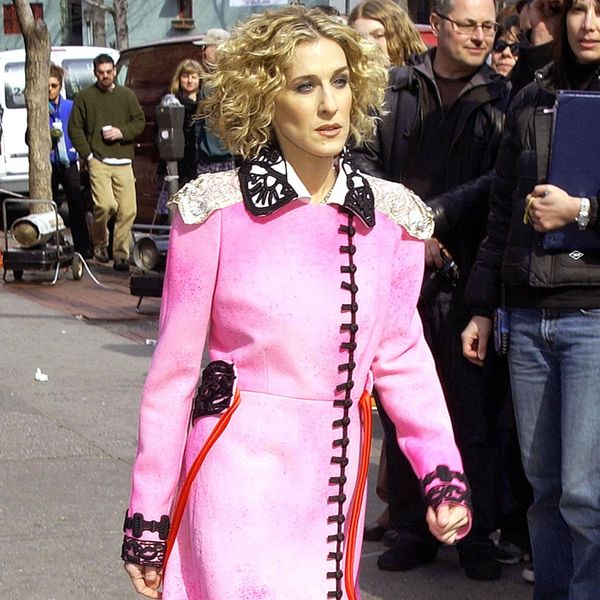 Twenty years ago today, Sex and the City premiered on HBO, changing the course of TV fashion forever. The clothing became an unnamed fifth character as the show's costume designer, Patricia Field, created a sartorial legacy through the wardrobes of Carrie Bradshaw, Charlotte York, Samantha Jones, and Miranda Hobbes. Week after week, eye-catching ensembles from unknowns to top designers gave us an unending source of style inspo. Here, we’re paying homage to 20 of the best looks Carrie Bradshaw ever sported on set. Scroll through to see our top picks, ranked!
20. Striped Dress and Headwrap: Hot summer days call for breezy style, and Carrie’s strapless striped outfit was pretty much perfect. That frizz-reducing coordinated headwear didn't hurt, either! (Photo via Mark Mainz/Getty)
19. Brown Coat Over Black Lingerie: The queen of mix-and-match, Carrie could make just about anything work together — even a brown coat with a black slip dress. (Photo via Arnaldo Magnani/Getty)
18. The Punk Pink Mini: Carrie proved she was no one-trick pony in the edgy Pepto-pink mini-dress, studded belt, pearls, and black peep-toe booties she wore to tell Sam she was getting hitched. (Photo via Marcel Thomas/FilmMagic/Getty)
17. Newspaper Dress: This John Galliano for Christian Dior getup was more than fitting, given Carrie’s newspaper roots. The dress was so good, in fact, that she actually wore it twice — once in season 3 of the show and once more in SATC 2. (Photo via James Devaney/WireImage/Getty)
16. Pink Floral Dress: Vivienne Westwood was behind the gorgeous strapless architectural piece the sexpert stepped out in for the first film along with an ostrich Salvatore Ferragamo bag. (Photo via Arnaldo Magnani/Getty)
15. Pouf Skirt: One of Carrie’s quirkier fashion moments came courtesy of this Dolce and Gabbana pouf skirt and fur wrap seen in the first movie, and we were HERE for it. (Photo via Arnaldo Magnani/Getty)
14. The Watermelon Dress: Everything was trés chic — but lonely — for our heroine in Paris, including the watermelon-patterned Balenciaga frock she strolled the city’s streets in. (Photo via James Devaney/WireImage/Getty)
13. Tiered Tutu and Booties: Carrie never met a tutu she didn’t like and it wasn't hard to see why: We couldn't take our eyes off of this tiered version, topped off with darling white booties. (Photo via Arnaldo Magnani/Getty)
12. Flashdance Extravaganza: Carrie's '80s alter-ego, as seen in SATC 2, did not disappoint with this shoulder-baring sweatshirt and white denim: Eat your heart out, Jennifer Beals! (Photo via Philip Ramey/Corbis/Getty)
11. The Ruffle Dress: The fictitious writer was rocking the off-the-shoulder trend way ahead of her time in a Richard Tyler number that eventually wound up in the lake. A Louis Vuitton handbag and clear vintage heels completed the look. (Photo via Craig Blackhorn/Getty)
10. The Plaid Crop Top: Even Carrie’s casual looks were on point — her plaid crop top and high-waisted jeans would TOTALLY fly today. (Photo via Philip Ramey/Corbis/Getty)
9. The Purple Flapper Dress: By the franchise’s second film, Carrie’s style was refined AF — see this tiered purple Halston Heritage dress, Christian Louboutin bag and heels, and Jennifer Zeuner necklace for proof. (Photo via Gustavo Caballero/Getty)
8. The White Wrap Dress: Carrie showed us how to do summer whites in the SATC 2 film while donning this Halston Heritage wrap dress ($325) with Christian Louboutin heels, a Chanel bag, and a Solange Azagury-Partridge statement necklace. (Photo via Philip Ramey/Corbis/Getty)
7. Neon Prints: This dress' busy, kaleidoscope-like colors were classic Carrie, through and through. (Photo via Tom Kingston/WireImage/Getty)
6. Furry Outerwear: Originally introduced in season one after being acquired as a $200 steal from a NYC consignment shop, this coat quickly became a staple in Carrie's wardrobe. (Photo via Ron Galella Ltd./WireImage/Getty)
5. Colorful Stripes: A brightly-hued Club Monaco sweater, Nanette Lapore dress, and a red Chanel jacket combo were all Carrie needed to brighten up a dreary day. (Photo via Lawrence Lucier/Getty)
4. The Pink Flare Dress: This Oscar de la Renta dress swept us — and Carrie —off our feet thanks to the Russian in the season six episode that made the frock famous. (Photo via Arnaldo Magnani/Getty)
3. The Cream Tux: Carried proved she could pull off menswear just as easily as a couture dress in the Ralph Lauren power suit she sported with a pink button-down for the first film. (Photo via Marcel Thomas/FilmMagic/Getty)
2. The Green Fairy Gown: A fairytale ending deserves a fairytale look, and that’s exactly what Field delivered with this green tulle tutu dress with a cream tuxedo jacket— swoon! (Photo via James Devaney/WireImage/Getty)
1. The Cloud Gown: Of all of Carrie’s outfits, there was arguably none more memorable than the strapless Vivienne Westwood Cloud gown she wore for her almost wedding to Mr. Big. The piece, which is currently on display at the designer’s flagship New York boutique through June 10, was originally shown for the fashion house’s Winter 2007/2008 collection. After it was seen in the first movie however, the Carrie effect took hold , with a shortened, $10,000 version selling out in minutes. (Photo via James Devaney/WireImage/Getty)

Which Carrie Bradshaw ensemble stood out for you the most? Discuss over @BritandCo.

Which Carrie Bradshaw ensemble stood out for you the most? Discuss over @BritandCo.

Nicole Briese
Nicole is the weekend editor for Brit + Co who loves bringing you all the latest buzz. When she's not busy typing away into the wee hours, you can usually find her canoodling with her fur babies, rooting around in a bookstore, or rocking out at a concert of some sort (Guns N' Roses forever!). Check out all her latest musings and past work at nicolebjean.com.
Style
Style News
Style TV