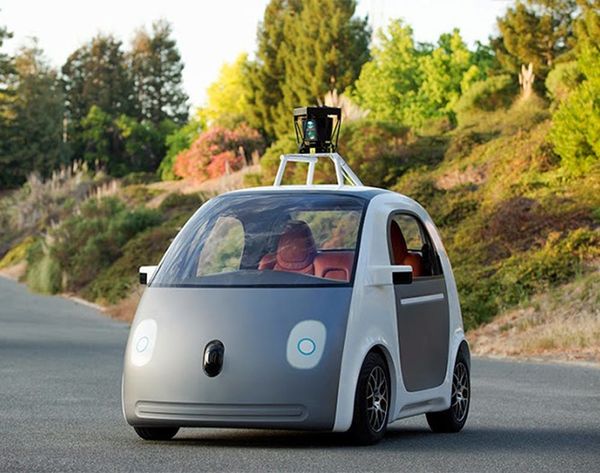 Maybe you saw the silly storyline on the HBO show Silicon Valley where that guy from The Office gets stuck in a self-driving car with a mind of its own. Definitely you saw the one of Google’s fleet of self-drivers — a Lexus that spins its own steering wheel, can navigate traffic jams and has the ability to read cyclists’ hand signals. Last night, Google unveiled the real deal, the prototype for its self-driving vehicle:

And it’s really cute. We half expect it to have an a-woo-gah honk and a grill that curves up into a goofy grin.

There were whispers of what car companies Google would work with, and assumptions that the first driver-less cars on the road would be similar to your whip, minus your butt in the pilots’ seat. Now we’re seeing what Google really has in mind. In creating the prototype, they started with a blank slate and set out to rework our vehicles. The car doesn’t have, nor does it need a steering wheel, an accelerator pedal or a brake pedal. Instead, it runs simply on Google’s sensors and software, going no more than 25 mph.

Forget Apple’s vision of a pimp-my-ride-with-tech future, Google’s premiere model is a no-frills smart car, with little more than on and off buttons, a screen to show you the route and the two seats and seat belts you can see BFFs (at least, we hope) and test drivers Annie and Judy strapped into here. But look at how much fun they had! Watch the video below where families, the elderly, the visually impaired and even a four-legged friend get to go for a hands-free ride:

Google makes some pretty significant claims for what roads where self-driving cars ruled could be like. They’re not just looking to make an automobile that simply knows the best way to get you from Point A to Point B — their cars will “shoulder the entire burden of driving.” That means, yay, you won’t waste any of *your* time looking for parking. It also means, more seriously, drunk driving and distracted driving could be a thing of the past. With a focus on learning instead of luxury, and a plan to make our future roads safer above all else, it looks like Google wants you to start relying on them to get around in a whole new way.

Would you give Google’s self-driving car a test “drive”? What do you think of self-driving vehicles? Share your thoughts below!

Lisa Raphael
In her past professional lives, Lisa has served the masses as the Editorial Director at Brit + Co, Bieber Whisperer at J-14, Golden Girls Fan Club Prez at Lifetime and Talk Show Host Understudy to Katie Couric. Now, she's taking on the sports world at The Relish, teaching Hairography 101 in her spare time and will forever be trying to fill the hole Zayn Malik left in her heart.
Google
Tech
Google