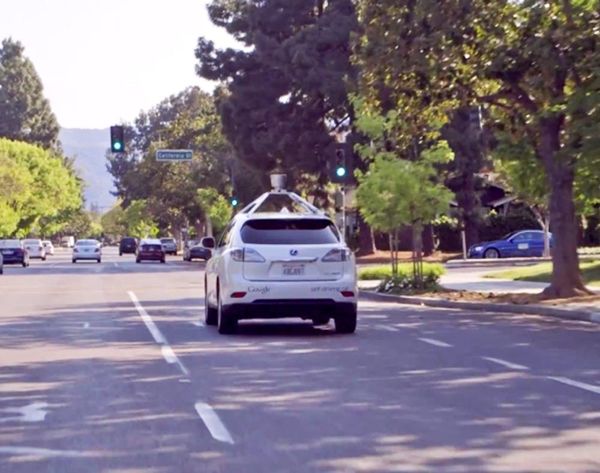 If the thought of self-driving cars taking up the streets of your city has you worrying, stop. That car is a better driver than you. And if you’re a cyclist or pedestrian, it’s even more thoughtful than the other whips with real people behind the wheel. Right now Google’s auto-piloted automobiles have been on the road for 700,000 miles accident-free, which is a lot more than some of us can say (not naming names, but…)

Over the last couple years, engineers have been letting the fleet of self-driving cars loose on the streets of Mountain View, CA. In their near-million miles, they have been testing out all of the potential scenarios you might run into on the road, with engineers teaching the cars how to recognize and navigate each one.

Check out a couple images below that show you what Google’s cars see. They spot cyclists and pedestrians, crossing guards holding signs, other cars, trucks and possible “danger zones” (construction, railroads, busy intersections).

At a busy intersection, like the above, the self-driving car knows to stop and wait ‘til the road is clear before passing through it. When it drives up near a large object like a truck, it will move to keep a safe distance from it.

Ever get a ticket for speeding through a construction zone? Not this car. It detects orange cones and signs to recognize upcoming construction and react accordingly.

At a railroad crossing, the self-driving fleet waits until there are no trains and no cars on the tracks before moving through.

Good news for cyclists — the cars detect bikers as a special type of moving object, understand their gestures to predict if they might move into the lane and proceed with immense caution. Another reason to make sure you’re using your hand turn signals: future tech. It’s learning to yield to you, so help an auto out, K?

Take Google’s self-driving car for a test drive below:

Even with hundreds of thousands of accident-free miles and the ability to read stop signs and cyclists’ next moves under its belt, the cars need more time navigating busy, unpredictable city streets, more practice merging and changing lanes, turning right on red and handling bad weather. Only four states and Washington D.C. formally allow self-driving cars on roads right now, but experts say they’ll take up a huge chunk (75%!) of car sales by 2035. In the next few years, expect to see Google open source their software and team up with car manufacturers to get rides like this on the road. And you though your CarPlay was cool…

What do you think of self-driving cars? Are they the future, the present or just too crazy for you to wrap your head around?

Lisa Raphael
In her past professional lives, Lisa has served the masses as the Editorial Director at Brit + Co, Bieber Whisperer at J-14, Golden Girls Fan Club Prez at Lifetime and Talk Show Host Understudy to Katie Couric. Now, she's taking on the sports world at The Relish, teaching Hairography 101 in her spare time and will forever be trying to fill the hole Zayn Malik left in her heart.
Google
Tech
Google
More From Tech