How Searching on WebMD Landed Me in the Emergency Room 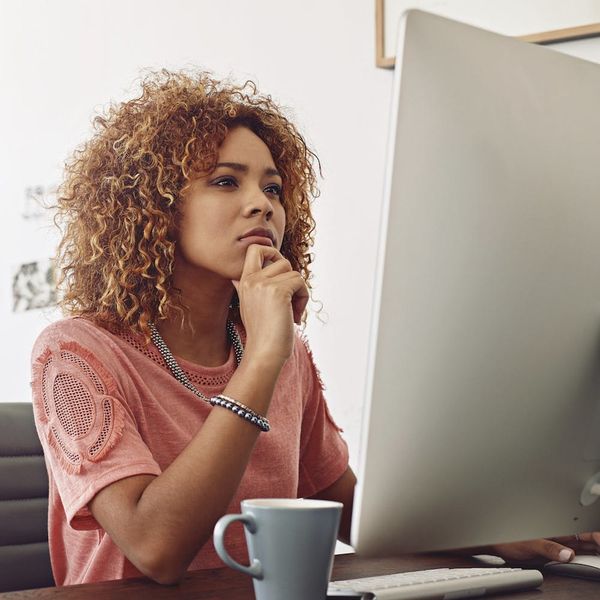 Once upon a time, after drinking a few too many cups of coffee, I noticed my heart fluttering — nothing crazy, just a little bit out of rhythm every now and again. Normally I am able to ignore little things like that, but having been a little on-edge already due to lack of sleep (#momlife), I couldn’t stop thinking about it. What if my body was trying to tell me something? What if something was wrong with my heart, and ignoring it meant I would die? As my anxiety escalated, I began to feel like I wouldn’t calm down until I had an answer for what was happening to my body, even if it was the wrong one. So instead of practicing my mindfulness routine and taking some deep breaths to allay my rising panic, I made a mistake: I went online. And then I ended up in the emergency room.

Let me fill in the gaps for you.

There’s a little corner of the internet called WebMD that’s particularly unhelpful for hypochondriacs like me (oddly, and somewhat hilariously, even WebMD admits it might cause anxiety). While having unending streams of information at our fingertips can be helpful for things like, um, research papers and genealogy, using the internet as a gauge for health can be not only unhelpful, but detrimental (as I discovered a little too late in the ER when the resident told me my heart was “a-okay”).

A lot happened between my initial Google search and my trip to the hospital at 10pm. Of course, my self-inflicted stress only made it worse. The more obsessed I became with the information I was taking in (heart attack? pulmonary embolism?), the more my heart raced, which only served as evidence that something terrible was happening to me. Essentially, WebMD fed my anxiety until it became so big I had to listen to it. I do struggle with generalized anxiety and panic attacks to begin with, but through years of medication and therapy, I have developed tools to talk myself down from panicked moments like this. I found that the noise on the internet — all the possible symptoms I could have — drowned out my ability to actually think through what was happening to me and listen to my body.

While in retrospect it’s very obvious my fluttering heartbeat was likely due to excessive caffeine consumption, the desire to self-preserve overrode my logic in the moment. Instead of waiting it out to see if my heartbeat calmed down with some deep breathing, I let my hyper-vigilance get behind the wheel and ended up paying for it (quite literally, thanks to my high-deductible insurance plan). I believed something was wrong with me, that my heart was failing — and so I began to manifest the symptoms I read, line by line.

According to Dr. Keith Humphreys, a psychiatrist at Stanford Healthcare, self-fulfilling prophecy is a very real phenomenon, and he sees it frequently among medical students. “There’s this thing called Medical Students’ Disease in which students under stress and pressure begin to manifest symptoms of really rare syndromes,” he tells us. “When a huge well of anxiety meets a pile of potentially scary information, we can sometimes focus on the negative.”

To be clear, the internet (or any other information source) is not exactly to blame for my trip to the ER or Medical Student’s Syndrome. Like mental health in general, it’s more complicated than that, given that most people who have hypochondria already suffer from anxiety — according to one study, only about 35 percent of hypochondriacs have hypochondria as their only mental health diagnosis. It’s the intersection of preexisting anxiety and information that exacerbates hypochondria, not the existence of the internet itself. For someone who isn’t anxious to begin with, WebMD might actually be a helpful tool to determine whether or not to go in for a checkup. But for people like me who are already at risk for panic and anxiety, information can be a trigger, especially if it doesn’t come from a doctor who can actually examine you in person.

So, what is WebMD good for? Health information online may be a dime a dozen, but good information is out there. “For all the negative things about the internet, I can think of positive things, like people getting accurate, helpful information about mental health,” Dr. Humphreys says. Along the same lines, he says health information aggregates like WebMD can be more useful than, say, websites peddling random wellness products, which are obviously biased and non-scientific.

Still, even in spite of the possibility it could be beneficial, I tend to avoid WebMD these days, especially if I am struggling with anxiety already. Instead, when a symptom surfaces, I try to listen to my body. If something is really bothering me or it gets worse over time, I usually involve my doctor, who I trust to be thorough (and empathetic). I’ve also found that managing my anxiety has drastically reduced the symptoms that make it worse, like a fluttering heart or shortness of breath.

If you’re struggling with health anxiety, whipping out your iPhone to research may seem like a quick way to put a band-aid over a concern, but if you’re anything like me, it could make your panic worse. The best route, I’ve found, is to talk with a real, live physician about your concerns and work through your struggles with a therapist. While the internet can be a great tool in many ways, sometimes it’s best left to what it does best — online shopping, GIFs, and the occasional meme.

Do you use WebMD? Tell us about it @BritandCo!