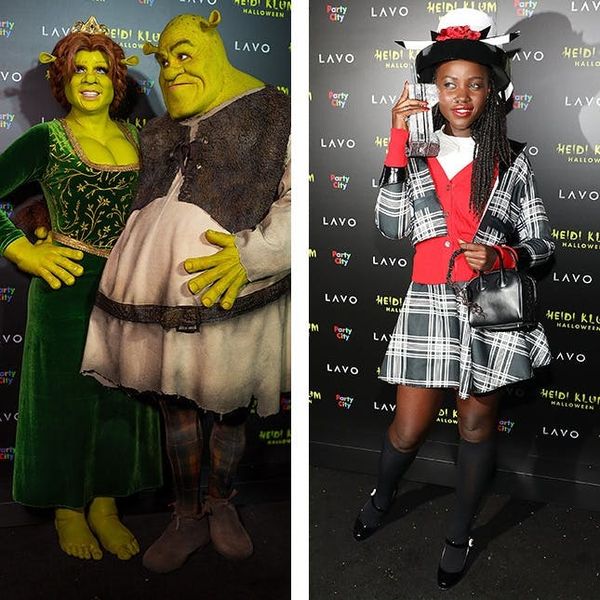 If there’s one celeb that basically wins Halloween every year, it’s Heidi Klum. Known for her intricate costumes and annual star-studded party, the “Queen of Halloween” outdid herself this year. Klum invited a slew of her Hollywood friends to her 19th annual bash on October 31 at LAVO in New York City. Klum showed up to her soiree in a brilliant Fiona costume (her new boyfriend Tom Kaulitz went as Shrek). Other A-listers also stunned, including Lupita Nyong’o as Dionne from Clueless and Sophie Langford as Little Red Riding Hood. Keep scrolling for an inside-look at all the best-dressed celebs at Klum’s annual Halloween Party. We’re hoping for an invite next time!
Heidi Klum and Tom Kaulitz: As Fiona and Shrek. (Photo via TheStewartofNY/WireImage/Getty)
Lupita Nyong'o: As Dionne from Clueless. (Photo via Taylor Hill/FilmMagic/Getty)
Winnie Harlow: As RuPaul. (Photo via Photo by Taylor Hill/FilmMagic/Getty)
Sophie Langford: As Little Red Riding Hood (Photo via Noam Galai/Getty Images)
Kat Graham: As The Mask. (Photo via TheStewartofNY/WireImage/Getty)
Bella Hadid and The Weeknd: As Lydia and Beetlejuice. (Photo via Gilbert Carrasquillo/Getty)
Padma Lakshmi: As the Black Swan. (Photo via Taylor Hill/FilmMagic)

Bobby Schuessler
Bobby Schuessler is a contributing fashion writer at Brit + Co and has contributed to Who What Wear, Refinery29, Lucky, Glamour, Out, Nordstrom, and Barneys New York. When he's not writing about style and shopping, you can find him catching up on the latest Housewives franchise and sipping his go-to drink, a vodka martini with a splash of cranberry and a twist.
Celebrity Style
Trends and Inspo
Celebrity Style Costumes Halloween Holiday Party Style Inspiration
More From Trends and Inspo