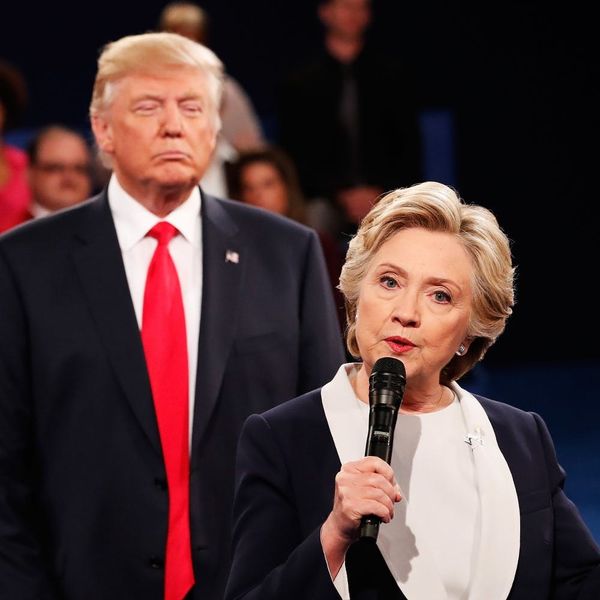 It’s been a week since the second presidential debate took place, but folks simply can’t stop buzzing about it. Which isn’t all that surprising, when you consider the sheer amount of craziness that transpired, including Donald Trump’s really disconcerting body language. While social media wasted no time calling out the Republican presidential hopeful for having what many described as a predatory stance and basically stalking his opponent around the stage, Hillary Clinton has remained pretty quiet on the subject. Until now.

Sitting down for a chat with Ellen DeGeneres for her first interview since the debate, Secretary Clinton finally shared how it really felt to have Trump constantly looming over her shoulder, and yes, she was just as creeped out as everyone watching at home. No surprises there!

“He was really all wrought up and you can just sense how much anger he had, and so he was really trying to dominate and then literally stalk me around the stage,” she said, referencing the leaked Access Hollywood video, which has shaken First Lady Michelle Obama to the core. “I would just feel this presence behind me and I thought, ‘Whoa, this is really weird.’” Umm, so did we, Hill. So. Did. We.

Tomorrow – the tape, the debate – @HillaryClinton is talking to me about it all.

Secretary Clinton went on to answer more questions about the debate, as well as the election overall, and she also took a second to do something that surely eeeeveryone will be able to appreciate: She showed off her signature shimmy, giving the Ellen audience at least one thing to laugh about. Yas! #Shimmy2016