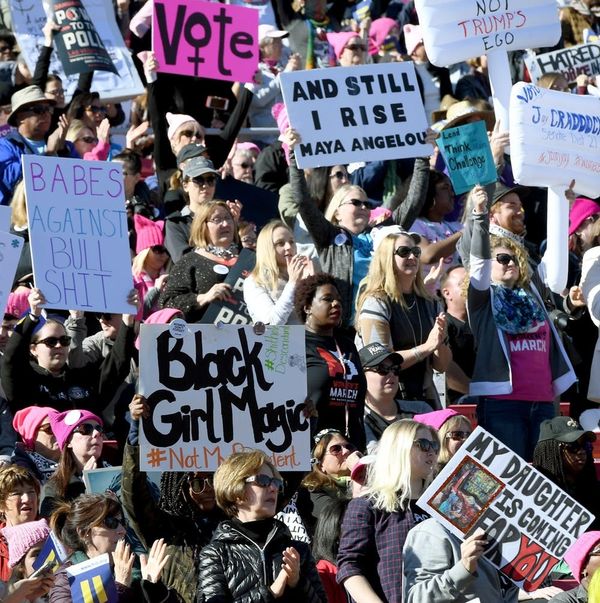 The 2017 and 2018 Women’s Marches were not just isolated occurrences: a full-on political movement and Women’s March organization has grown out of the marches, and it’s just about time to get in formation once again. The hub of the march and rally is, once again, our nation’s capital. The Washington DC march is slated to begin on January 19, 2019 at 10 am on the National Mall, followed by a 1:30 pm rally on the steps of the Lincoln Memorial. This year, its goals are to drive even more action and policy change into the government than past years.

“In 2017, the march was really the response to the direction of the country—the vision wasn’t necessarily to launch an organization after the march, but the momentum wasn’t slowing,” Rachel O’Leary Carmona, COO of the Women’s March organization, tells us.

Just in 2018 alone, the organization has been on the front lines protesting the family separation actions at the US border and the nomination of Brett Kavanaugh to the Supreme Court, and it has no intentions of slowing down anytime soon. In fact, these events have spurred even more impassioned participants to get involved in the organization and the 2019 march.

“As a group of both seasoned activists and newer activists, we’re working toward more political education and a national policy platform,” Carmona adds.

The Women’s March team is currently working on a policy agenda for the 2019 march with representatives from around 70 activist organizations. There are subcommittees working diligently on policy solutions to issues like climate change and racial injustice, to be enacted within the next two years, Carmona explains.

This coming year’s marketing is centered around the celebration of the #Women’sWave that stormed the government, particularly the House of Representatives, in the recent midterm elections. And, in Carmona’s (slightly biased) view, the Women’s March is a major reason all these powerful women have been mobilized to get directly involved in politics, many of them for the first time.

“Call it a ‘blue wave’ or what you like, but the reality is that the Women’s March opened up the door for thousands of women to run and get elected,” Carmona says.

The team hopes to continue the trend in years to come, because we are seeing such concrete positive change coming from the marches and other demonstrations led by the Women’s March organization. “We can’t ignore the fact that it’s women who are at the front of the resistance of the government, making sure that there are no more assaults on our rights,” Carmona says.

To get marching on January 19th, you can organize a bus or hop on an already organized bus to DC. If train travel is more your speed and you’re near an Amtrak station, look into Amtrak’s group rates program. Leading up to the day of the march, it’s a good idea to purchase cards in advance for the DC metro system to avoid super long lines at the subway stations.

For anything else you need on the day of the march, there will be a main support station at Constitution Gardens at 21st and Constitution Avenue NW, with water, heating tents, medics, and more. You’re also allowed to have a small bag or backpack with essentials in tow, or feel free to store larger bags at Union Station. And the Women’s March website ensures that the march is inclusive to all, and will include accommodations for individuals with any disabilities, as well as Spanish translation and American Sign Language interpretation for participants who need it during the rally portion of the event.

If you can’t make it to DC for the day, Carmona recommends getting involved with a Sister March near you. There will be satellite groups of powerful people marching in cities like San Francisco, Los Angeles, Colorado Springs, Las Vegas, Houston, Dallas, Oklahoma City, Nashville, Chicago, New York City, Atlanta, Philadelphia, and Pittsburgh.

If you don’t see a Sister March location near you, it’s not too late to host one and help keep the #Women’sWave going.

Mara Santilli
Mara Santilli is a freelance writer based in New England. Her work has appeared in several publications, including Shape and Marie Claire. When she isn't writing, she can be found munching on any piece of dark chocolate she can get her hands on, plunking out her favorite acoustic songs on the guitar, and finding the cheapest Broadway tickets possible. Follow her adventures on Instagram to see where she's headed next.
Activism
Politics
Activism Politics womens march
More From Politics