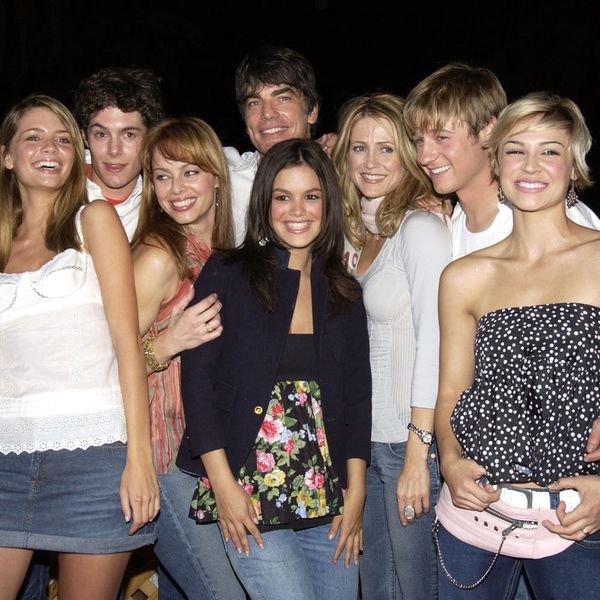 We’ve seen a lot of show reboots come to light as of late (welcome back, Will & Grace!), but one ‘00s hit we can’t seem to get over lives on solely in our memories, despite our pleas for more — The OC. The Fox smash hit from our youth turns 10 years old today, and while some of the show’s bigger stars (like Mischa Barton and Rachel Bilson), have been pretty easy to keep tabs on over the years, the most obscure breakouts from the first season have left us wondering: What the heck have they been up to all these years? Wonder no more, fans: We’ve got the scoop for you below. Check it out!

1. Peter Gallagher: Peter Gallagher had a pretty solid acting career behind him before the show even started, so it’s no big surprise that it’s continued on since the show’s demise in 2007. Starring in everything from the totally underrated Burlesque alongside Cher, Kristen Bell, and Christina Aguilera to Law & Order: Special Victims Unit (where he’s a series regular), to our new obscure indie faveHello, My Name Is Doris, Gallagher’s kept himself plenty busy. (Photo via Nicholas Hunt/Getty)

2. Kelly Rowan: 2007 was a heck of a year for Kelly Rowan and her beloved character, Kirsten Cohen. Not only did the show end, but Kelly also ended her engagement to then fiancé David Thomsen — but not before conceiving a baby girl that she gave birth to in 2008. Her most recent roles were back in 2015, with guest spots on both Castle and Murdoch Mysteries. (Photo via Joshua Blanchard/Getty)

3. Benjamin McKenzie:The OC more or less put its previously unknown star, Benjamin McKenzie, on the map, and he’s been there ever since: You’ve likely caught him as Ben Sherman on Southland or in his current role as James Gordon on Gotham — which, incidentally, also happens to be where he reunited with co-star Morena Baccarin (who appeared in three episodes of The OC as Maya Griffin), with whom he welcomed a child last March. (Photo via Craig Baritt/Getty)

4. Mischa Barton: Since her breakout role as everyone’s favorite “It Girl,” Marissa Cooper, Mischa took some much-needed time off from the spotlight after the series ended, though she remained in the tabloid headlines thanks to her rather tumultuous personal life, which included some struggles with mental health. She made her big comeback in the form of a stint on DWTS, but has most recently found herself in some hot water for an insensitive Instagram post and was later taken to the hospital for mental evaluation after reportedly being drugged. (Photo via Neilson Barnard/Getty)

5. Adam Brody: After dating and splitting from co-star and onscreen love interest Summer (Rachel Bilson) IRL, Adam found love with Gossip Girl’s Leighton Meester. The duo welcomed a daughter with a super unique name back in 2015, but Brody’s certainly not a stay-at-home dad. He’s been spotted in at least one film per year since his role as everyone’s favorite nerd, Seth Cohen, came to a crashing halt in 2007, with parts in such little known films as Jennifer’s Body, Think Like a Man Too, and Yoga Hosers. (Photo via Michael Loccisano/Getty)

6. Tate Donavan: The former fling of both Sandra Bullock and Jennifer Aniston, Donovan’s had steady work since The OC, and it looks like he’ll be squaring off with Peter Gallagher once more soon, as it’s just been announced that he’ll be appearing on Law & Order: SVU. (Photo via Nicholas Hunt/Getty)

7. Melinda Clarke: Melinda (AKA Marissa Cooper’s misguided mother, Julie Cooper, and our personal fave) has also gone on to see several of her former OC castmates again, crossing paths with Autumn Reeser on Entourage and, more recently, with Benjamin McKenzie on Gotham. (Photo via Joshua Blanchard/Getty)

8. Rachel Bilson: What hasn’t Rachel Bilson done since her stint as the lovably obnoxious Summer on The OC? Not only is she a fashion icon in her own right, but she’s taken on roles in film, such as The Last Kiss and Life Happens, and gone on to star in her very own series, TheHart of Dixie, in which she played the lead role of Dr. Zoe Hart. She even found time to be a picture-perfect bridesmaid for her BFF! On a more personal note, Bilson forged a romantic relationship with her onscreen love, Adam Brody (awwww!) before breaking up and moving on with actor and now-hubby Hayden Christensen. The couple had daughter Briar Rose two years ago in August. (Photo via Phillip Farone/Getty)

9. Autumn Reeser: Summer’s arch-nemesis met with her again in an episode of The Heart of Dixie, but it wasn’t Reeser’s only TV role: She’s also seen recurring spots on Entourage, No Ordinary Family, Hawaii Five-0, and, most recently, The Arrangement (among a long list of others). She now has two sons with ex-husband Jesse Warren. (Photo via Frederick M. Brown/Getty)

10. Samaire Armstrong: Armstrong was never supposed to last past episode one of The OC, but after she made her debut as Anna, fans couldn’t get enough, prompting producers to keep her on as Seth Cohen’s other love interest. She’s starred in a few films since then (Stay Alive, Just My Luck), as well as earned herself spots on several other shows (Resurrection), but her greatest role these days is that of mommy: Armstrong gave birth to baby boy Calin back in 2012. (Photo via Randy Shropshire/Getty)

12. Chris Carmack: Fans of Nashville (which returned to a new network this January) might not even remember that before Chris Carmack was starring in his current role as country musician Will (who has made some waves in the LGBTQ community with his struggles as a gay man being forced to present himself as a heterosexual sex symbol), he was playing the role of Marissa Cooper’s meathead BF, Luke. He reportedly left the show early on due to lack of guarantees for screen time, but we’ll never forget his legendary skirmishes with the show’s lead, Ryan Atwood. (Photo via Ethan Miller/Getty)

Which OC character was your fave? Vote over @BritandCo.