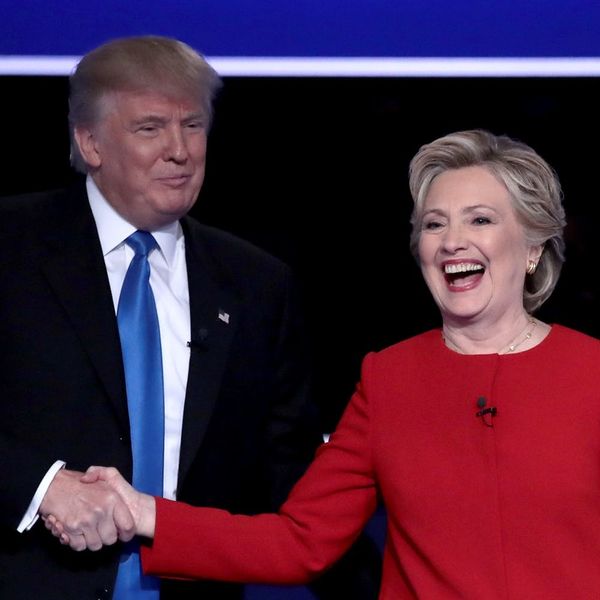 The election may be long over, but it looks like President Trump still can’t quite completely distance himself from his political rival, Hillary Clinton. Even in the White House, even while greeting a group of tourists, Clinton is always looking over Trump’s shoulder. Almost literally, this time around, and in a totally unexpected way.

When President Trump decided to stop to greet a group of folks touring the White House yesterday, he couldn’t possibly have picked a better spot to stand.

Trump just surprised visitors on a White House tour. Crowd loved it. Notice the wall behind him. pic.twitter.com/iogSRJGXJo

Do you see it? Yep, that’s a portrait of former First Lady and former Trump opponent Hillary Clinton hanging on the wall behind the now-President. Seriously, take a look at the epic side-eye on the dude in the background. Bahaha!

While the folks on the tour were kept back behind a rope and the President seemed to keep his distance (except for one photo-op with a boy picked out of the crowd), this was the opportunity of a lifetime for a pretty darn epic pic for those in the crowd.

You never know what surprises may await you on a @WhiteHouse tour! pic.twitter.com/VNLpoXRZs4

Though, considering there are a heck of a lotta pro cameras present and the entire scene looks totally set-up, we have to wonder how no one spotted the quirky detail on the wall. Or perhaps they did, and this is supposed to be sending some sort of message. *shrugs*

Do you think President Trump was aware that Hillary Clinton’s portrait was behind him or do you think it was a quirky coincidence? Let us know @BritandCo!