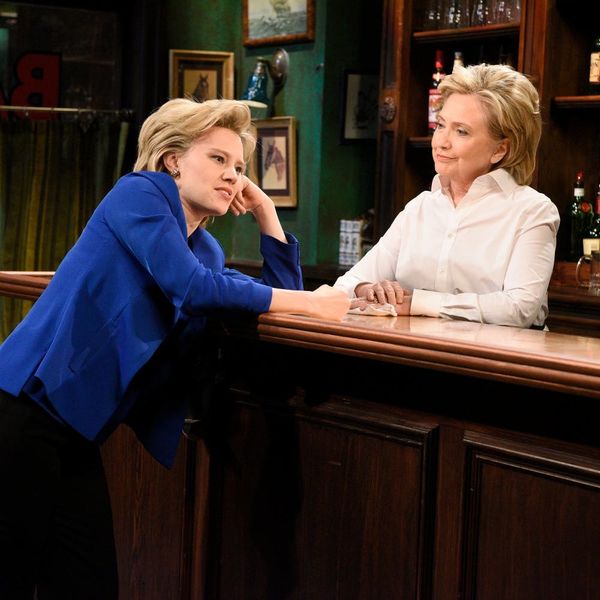 It was like a scene from SNL, only it was real and it was awesome. Hillary Clinton stepped out in NYC last night and enjoyed dinner and a show with a few pals, one of whom happened to be Kate McKinnon. Yep, SNL’s Hillary Clinton (who also happens to be one heck of a Ghostbuster as well as the new Ms. Frizzle on The Magic School Bus Rides Again) and the IRL Hillary Clinton spent a night together, and it looks like it was just as amazing as we could imagine.

Yeah, nowadays (especially because of or despite the election outcome), it’s basically a classic.

.@HillaryClinton and Kate McKinnon (SNL's Hillary) enjoy a night on the town in NYC: https://t.co/OKs5PnYQH0 pic.twitter.com/4FwFlFyNbk

Well, we basically got to enjoy the IRL sitch when Clinton and McKinnon (along with another pal) enjoyed a meal at NYC’s Orso before catching Glenn Close perform in Broadway’s Sunset Boulevard. Sharing a bottle of wine while the former presidential candidate held court, Kate was obviously absorbed in whatever Clinton was saying — that is, if her body-language is any indication.

Oh, how we wish we could’ve been in on that gals’ night out.

What do you think Hillary Clinton and Kate McKinnon discussed during their night out? Let us know @BritandCo!

Desiree O
Desirée O is a ‘Professional Bohemian’ who loves anything and everything related to the arts, entertainment, and pop culture. She ADORES being a ‘Newsy’ for Brit + Co, covering all of the latest tidbits of awesomeness that you want to read about. When she’s not writing, she’s either making messy art, going on long adventurous walks with her camera, or poking around over at bohemianizm (http://www.bohemianizm.com/). You can find out about Desirée O and her work at http://DesireeO.com/ or follow her on Twitter @DesireeO.
Politics
Entertainment
Politics