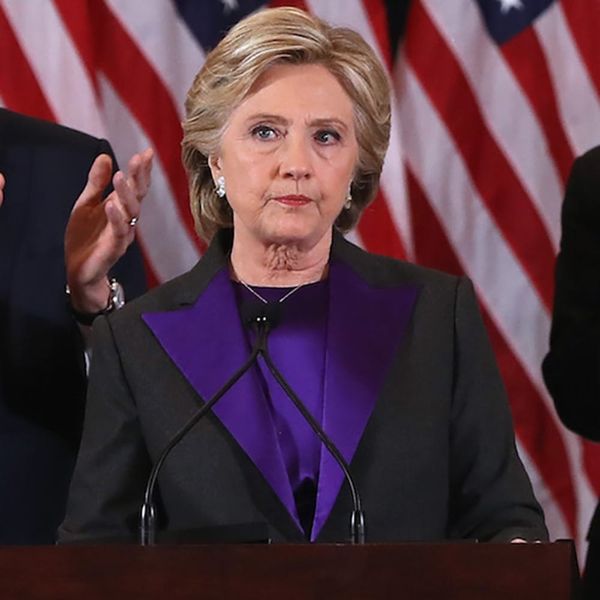 When Hillary Clinton delivered her concession speech last week, it tugged at the heartstrings of a significant chunk of America. For many of the 62.4 million voters who backed Clinton on their ballots, it was undoubtedly a hard one to watch. But she handled it gracefully, all while looking fly in that symbolic purple suit. Her speech will forever be remembered for a myriad of reasons, but there was one particular moment that marked a new moment in history. It was the moment Hillary Clinton told America: “I’m sorry.”

As Clinton approached the podium on Wednesday morning she told the audience, “This is not the outcome we wanted or we worked so hard for, and I’m sorry that we did not win this election for the values we share and the vision we hold for our country.” And with that Clinton became the first losing presidential candidate to actually utter an apology to her supporters.

Fortune analyzed the transcripts of every past concession speech in US presidential history since 1952. And nowhere in any of them does the candidate apologize for the loss.

Hillary Clinton and her team are smart. They likely already knew this. So why add it in? We’re not psychic, so we’ll never be able to say for certain what went into the decision, but we’re going to guess that this had less to do with her being a woman (studies have shown women are more likely to apologize than men) and more to do with the high stakes and volatility of this election.

This loss wasn’t just politics for many Americans. The protests continuing to take place are proof of that. Trump ran a campaign like no one has run before and while many people welcomed the change, it concerned many other citizens on a deeper level than simply whether or not they agree with his policies. Hillary was a symbol of hope for many Americans, and yet her best efforts failed.

And so this time, for the first time, maybe it did seem appropriate for a candidate to acknowledge their loss as more than a political defeat, but something to be regretful for on a personal level. Because the potential and tangible consequences are currently feeling very real for both native-born citizens and immigrants.

Let’s not look at this moment as a reminder that Hillary is a woman and therefore more likely to apologize. Let’s look at it as an indicator that — regardless of your thoughts on her — she succeeded in understanding when business became personal.

Cortney Clift
Cortney is the senior writer and special projects editor at Brit + Co. She typically covers topics related to women's issues, politics, and lifestyle. When she's not buried behind her computer you'll find her exploring New York City or planning her next big adventure.
Election Day
Politics
Election Day